Ash Barty has resoundingly answered her biggest critic recently - herself - with a thumping three-set victory over two-time Wimbledon champion Petra Kvitova at the China Open.

After losing a narrow first set there was no stopping the world number one, who showed every bit of why she's worth that title in a 4-6, 6-4, 6-3 win over the Czech seventh-seed.

It was a tight struggle the entire way through, with Barty only winning three more points than Kvitova throughout the entire match.

But it was smart, edgy tennis from the 23-year-old, who recognised her advantage on serve and kept going for the easy service points, even at the expense of eight double faults. It was also a remarkably brave performance after the slightly disgrunted Barty we saw following her narrow quarter-final win, in which she admonished herself for a "stupid set". 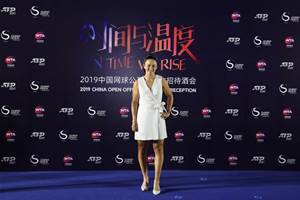 Barty lashes out at 'stupid set' as Kvitova looms

Ash Barty wasn't her usual easy-going self after struggling through a three-setter into the quarter-finals of the China Open. But there's a far bigger potential source of frustration awaiting her tomorrow...Petra Kvitova.

Kvitova - who has admittedly had a difficult run on and off the court since that shocking 2016 home invasion and resulting tendon lacerations - becomes arguably the highest profile victory of Barty's career since she took the WTA top-spot after Roland Garros.

The two-time Grand Slam champion and former world numer two was in hot form coming into this match however, and while Barty is arguably the superior on hard surfaces, the mental battle required to overcome a first-set deficit and cruise to a deserved victory was impressive to say the least.

It's been a hard slog over the past two months for the Australian champion, who has battled the weight of expectation with shock losses at the US and Canadian Opens.

But there was no doubting the Aussie's poise in those last two sets - she was both powerful from the baseline and precise in her shot-making, the two attributes that have led her to numero uno.

She hit nine aces at 65% of first serves in play and now moves into the Beijing semi-finals.

Notably, she's not competing at the doubles event, which will help focus her against two of her top four opposition on the circuit, world number three Elena Svitolina - who plays now - and number four Naomi Osaka, who faces current US Open champ Bianca Andreescu at 11pm AEST.