Speaking to The Daily Telegraph, Football Federation Australia CEO David Gallop stated that Australia could leverage the success of the 2015 Asian Cup for a 2023 bid.

“The Asian Cup will leave a great legacy and we can see the Women’s World Cup would also create many dividends for Australia, as well as driving football’s popularity,” said Gallop.

“Bidding for the 2023 FIFA Women’s World Cup is emerging as a central part of the Whole of Football Plan."

"The project will galvanise our efforts across the women’s game and give us a showcase for the Matildas, who are incredible players and fantastic ambassadors.”

Bidding for the Women's World Cup has been on the radar for the FFA for a number of years with 2011 and 2019 strongly considered inside headquarters before ultimately being quashed.

However, this is the first time there have been publicly attributed statements foreshadowing a bid for a FIFA Women's World Cup.

Early 2014, ahead of the 2019 Women's World Cup Expressions of Interest deadline, The Women's Game and women's football fans urged the FFA to bid.

In doing so, TWG put forward a case for the staging of the World Cup on the back of the 2015 Asian Cup.

With the 2015 Asian Cup a resounding success on many levels, including over 650,000 overall attendance at an average of 20,000, it seems the climate is now right for another global bid.

“The runaway success of the Asian Cup puts us in a very good position to talk to federal and state governments about supporting a Women’s World Cup bid.”

“These global events are part of the nation-building that football brings to the table."

In December 2013, the Japanese Football Federation, in explaining their rejection of a 2019 bid, announced that they would bid for 2023 edition.

Considering Nadeshiko's current power in women's football at all levels (current senior and U17 world and AFC champions), a Japan bid poses a major hurdle to overcome.

The bidding for the 2023 FIFA Women's World Cup would not commence until 2018. 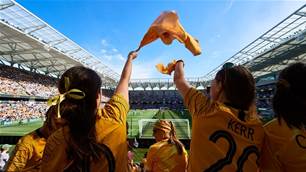