Perth Glory's head coach gave The Women’s Game an exclusive interview about the realities of his side's 10 week road trip. His detailed account highlights how he and his squad fostered a tight relationship, one that led to an inspired run of form. The Western Australian side only missed out on a Finals place due to goal difference.

It’s been the hardest two seasons imaginable for Perth Glory.  Last season, the club only received confirmation late in the day that they would be able to participate in the 2020/21 W-League due to COVID restrictions in Western Australia.

This led Perth’s then newly appointed head coach Alex Epakis  just weeks to prepare for the season including having to put together a squad which consisted largely of teenagers, some of whom were as young as 15.

After a successful rapid recruitment program, which brought a combination of some of the country’s brightest young talent along with an experienced spine, there was a great deal of positivity in Western Australia about Perth’s hopes for this latest A-League Women’s season.

This recruitment campaign was carefully planned by Epakis.

“It was about identifying the type of character and person that we wanted in terms of a profile and what that looked like," told The Women's Game.

"We came up with a matrix system that ensured that whatever player we looked to sign met enough of those metrics into what we wanted on and off the field.”

Those players included the likes of Alana Jancevski, Claudia Mihocic and Sofia Sakalis as well as the experience of Mie Leth Jans and the return of club legends Lisa De Vanna and Kim Carroll. 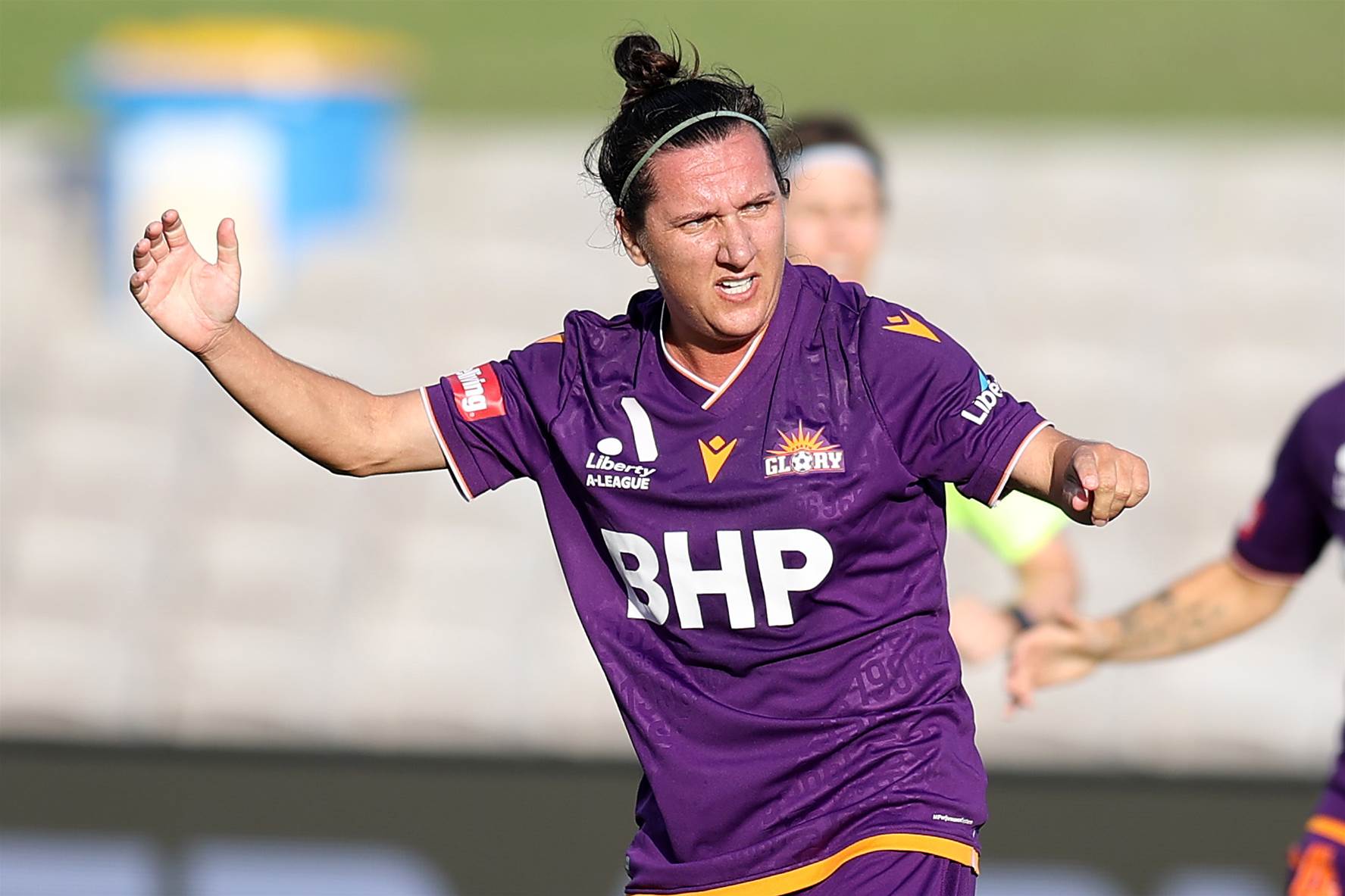 The head coach delved into how these new players performed across the campaign.

“The new players reflected the values of the existing squad members and fitted in very well into our environment and culture that was built from the season prior.

“The entire group exceeded all expectations - especially taking into consideration our circumstances and hurdles we had to manage during the course of the season.

"The performance of the players and the team was more often than not at a level that reflects our standard and level that we set ourselves. I am proud of every single player and staff member.

“We are a team that works hard, puts the team and club first, pushes each other and shares the overall good values of a being a team player.

"It is this approach and mind-set that is important to us and our team.”

That approach and mind-set turned out to be even more important when Western Australia closed its borders soon after the season began.  Sadly, Perth’s opening round game proved to be the only time they would play at home all season.

The match took place incfront of a bouncing Macedonia Park crowd of 1,000 against Brisbane Roar and which saw Glory earn their first win in almost 20 months at the death.  However, new COVID restrictions forced the team on the road for the rest of the 2021-22 campaign.

The month's long road trip brought another set of huge challenges both for the club as a whole, along with Epakis and his players.

This is because Perth’s squad reflects the realities of the A-League Women at the present time.

Players work full time, study full time, or are still at school.  In order to continue in the competition, these players had to negotiate with their employers and educators to be able to travel into a New South Wales hub for what turned out to be almost three months, or end their seasons instantly.

In the end, Epakis was able to take a full squad into the hub.  It was not an easy journey. Hub life became difficult when the squad were hit by a COVID outbreak in January and later, injuries.

These significant challenges, added to those of the previous campaign, left Perth’s head coach in arguably the most difficult job in women’s football. Yet, he has revealed that he has never thought about moving away from the club.

“That was certainly never a consideration. I have never had an easy job in my life - football or non-football related.

"Easy jobs don’t suit me, I like projects, and this is certainly the type of project I want to be involved with and see through.

“The club has been fantastic in their support towards me and the team, the players are the most committed I have come across, and the staff are professional and of a top standard.

"I am exactly where I would like to be at this stage in my career.”

Life on the road in North Sydney for those 10 weeks meant that Epakis and his staff became more than just football coaches. They were actively looking after the mental well-being of a group of players thousands of kilometres from home.

“Myself, the staff, and the leadership group put in extra efforts to ensure that the entire playing group was part of a safe and supportive environment considering the circumstances.

"We had to work towards finding the right balance of ensuring players had personal time and space, whilst also using the time together as an advantage to focus on football ideas.

“Overall, we handled it all very well. The leadership group and support staff were immense in ensuring things ran smoothly and they played an important part.”

Epakis is incredibly respected by his players. Having spoken to nine of them across the season, each has commented without prompting that the coaching provided to them at Perth Glory is unlike anything they have experienced anywhere else and is a major factor in why they are at the club.

I asked Epakis about his coaching philosophy.

“My approach is to ensure that all players feel supported and connected to our team vision.

"I focus on trying to give everyone time and ensuring that I try and build impactful connections with each player.

“It isn’t always easy to keep everyone happy with selections but that never compromises my approach towards supporting each player and highlighting the value they are bringing to the team.

"I try and keep our vision clear, our style of football consistent and communicated simply.

"Overall, I am here to serve the team and the players to the best of my ability.” Whilst the playing group were well looked and supported by Epakis and his staff, one cannot help but wonder who Perth’s head coach turned to during the period when things were at their toughest.

“I have some great support staff which I would often communicate with and brainstorm with to get differing ideas and points of views.

"We would always ensure that we were each okay and tried to spend some time enjoying each other’s company.

"I also have a very supportive partner, friends and family who each provides a great level of support away from the work environment.”

One facet of Perth’s team selection this season included the regular interchange of Morgan Aquino and Courtney Newbon as goalkeeper. Epakis was fortunate to have two highly talented shot stoppers, but the selection changes were not down to trying to keep both happy or an inability to choose between them.

“Both Morgan and Courtney offer a lot of value and certainly some of the selections decisions - as with any outfield player - is based on specific game plans and opposition.

"Both keepers did outstanding this season and they have a great mind-set and level of understanding.”

Along with the vast majority of his squad, Epakis is signed up for another year with Perth Glory, and the review process will shortly be under way to ensure the club do break into the top four in 2023.

“The staff and I need to review the season objectively and thoroughly. We will make sure we have a clear indication of what we did well this season, and what we can work towards improving leading into next season.

"We certainly made some significant forward progress this season in a number of areas. We want to build on that and ensure we are performing at an even higher level next season.”

Part of that review will include looking carefully at the local talent in this year’s WA NPL Women competition. There has been a lot of discussion recently among the women’s football fraternity in the state about the decreasing number of Western Australian players in the A-League Women and Matildas team.

Epakis can see signs of progress, but emphasizes that it will be a long-term process.

“I believe that all WNPL clubs in WA are doing really well in working towards establishing the best programs they can for their players and staff.

"Each year the clubs are adding things to be more professional and to help create an environment in which players feel stimulated and supported.

"Development doesn’t happen overnight and there is no magic formula but I certainly feel and see that we are moving forward.” More Perth Glory news can be found on their website.