Williams, a former AFLW listed player for the Western Bulldogs, will be supported by vice-captain, Natasha Hardy.

Here are our history makers!

Ahead of our Round 1 bout against Hawthorn, get to know our inaugural VFLW players here...

Williams said leading the club out in Sunday’s historic season opening match against Hawthorn at Windy Hill will be a proud moment.

“I’m excited by the opportunity and completely honoured to be named captain of the club’s inaugural VFLW team," Williams said.

“Sunday’s match is a historic moment for the club and its commitment to growing women’s football, but it’s also a proud moment for our playing group who’ve put in so much work over the pre-season in preparation for Round One and the season ahead.”

“We’re honoured to have the opportunity to don the sash, and we look forward to playing in front of a big Essendon crowd at the club’s spiritual home, Windy Hill.”

VFLW Coach Brendan Major said Williams’ experience, professionalism and leadership on and off the field made her a perfect fit for captain.

“It was important to have someone who is a strong on-field leader, but who also upholds the standards and values of the team off it.”

“I’m extremely proud of the playing group and the work they have put in over the pre-season. Sunday is a wonderful opportunity for them to take the first steps in what is an historic moment for the Club and this group of talented and driven players.”

#9 Lisa Williams - Captain
Originally from Diamond Creek, Williams played the 2017 AFLW season with the Western Bulldogs. She is a quick outside midfielder who likes to run and carry the football.

#4 Natasha Hardy - Vice-Captain
Hardy will support Lisa as the Bombers Vice-Captain.  She is an experienced inside midfielder who can also go forward and kick goals. Originally from Sunbury, she provides great on-field leadership and direction.

#18 Kendra Heil
Heil is a tough inside midfielder who can also play forward. She enjoys the physical nature of the game having grown up playing rugby. Kendra is a former Collingwood AFLW listed player who provides strong leadership and great training standards.

#1 Jess Trend
Trend is a quick and skilful midfielder originally from Eastern Devils. She is returning from injury but provides great spark, energy and enthusiasm for her team mates.

#23 Lauren Morecroft
Morecroft is the club’s playing defensive coach. Lauren has had a long successful career at VFL Level. She is a former Western Bulldogs AFLW defender who regularly plays on the best forwards in the competition.

#8 Hayley Bullas
Bullas is originally from Diamond Creek, and an emerging leader. Hayley is tough inside midfielder who thrives around the contest.

#7 Kirby Hicks
Hicks is a strong, competitive defender who uses the ball well off half back. Kirby is originally from Diamond Creek. She has a strong work ethic and is one of the competitions premier defenders.

Essendon will begin its 2018 VFLW campaign against Hawthorn at 1:00pm on Sunday May 6th at Windy Hill. 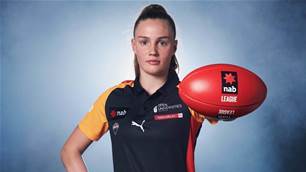