But like many young girls, it was the support of her mother - "my mum gave me a ball when I first started walking" - and a healthy amount of defiant self-belief, that gave her the courage to keep playing.

She would play the local boys and she told SBS News it made her a far better player.

“They don’t like to play soft, if they see girls on the field with them,” she said. “They like to go in hard and do everything 100 per cent.”

This season, she has the chance to show just how far she's come.

She already made her mark on the W-League and youth national teams last season.

But this time, Phonsongkham has to deal with the weight of expectation. Not just in her own prodigious career, but those of her club, who are expected to achieve big things this season.

Catch all of the goals from Round 11 in the link below:https://t.co/1YLCD4jvvT pic.twitter.com/ifrtIicxhm 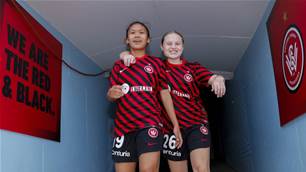