The Australian Diamonds will be looking to make their mark in their maiden World Cup clash against Northern Ireland.

Following a heartbreaking last-second loss to England in the 2018 Commonwealth Games, a game one victory will be an important step in chasing redemption throughout the Liverpool based tournament.

After failing to qualify for Sydney’s 2015 Cup, Northern Ireland will have their sights firmly set on asserting themselves as a contender beyond the preliminary group stage. Under the guidance of new coach, Australian Dan Ryan, there is every chance they could make the second round.

Yet, with a 94 per cent World Cup win rate, Lisa Alexander’s girls are seasoned professionals when it comes to performing in the global showpiece. Paired with newfound depth and diversity, the diamonds will be no easy feat for any side.

“We wanted to be sure we have the ability to change things up, to show that we have variety and not always playing a style that a rival team can predict.’’

Whilst the eighth-ranked Northern Irish will be aiming to expose Australia with a high speed, up-tempo game style, the potency of the first ranked Diamonds will be hard to stop.

“I think our 12 have enormous firepower and capability and we can use our bench to great ability,” Alexander said.

However, led by netball and Gaelic football spearhead Caroline O’Hanlon, Northern Ireland will be preparing for a competitive midcourt battle.

Yet, when speaking to Netball Australia, Diamonds captain Caitlin Bassett insisted all players, including the World Cup rookies, are in prime condition to face whatever may be thrown at them.

“(The new Diamonds are) so gifted athletically," she said.

“That really helps them get around, get off the body, take clean ball and come out of the circle and take some really good intercepts as well."

Australia and Northern Ireland will go head to head this Friday July 12th at 7:30pm AEST and will be LIVE on 9Gem. 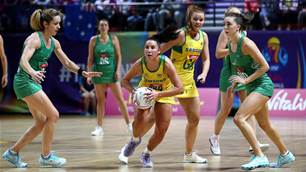