The Australian Diamonds have opened their 2019 Netball World Cup campaign with a 88-24 win over Northern Ireland.

Australia was taking no prisoners as they came up against the world No.8's and never looked like slowing down during the game.

Captain Caitlin Bassett had a mammoth first quarter, scoring all 18 of her attempts on goal and only kept this going throughout the second scoring a further 15, missing just one.

It was a seamless attacking for the Diamonds with the ball flowing through to the goal circle with support from goal attack Steph Wood, centre Liz Watson and wing attack Kelsey Browne.

The Aussies have been absolutely incredible so far. 🔥

Northern Ireland put up a valiant effort but their shooting, which was only at 78 per cent at halftime, along with slow passing which allowed the Diamonds to cover spaces, was letting them down.

With Australia coach Lisa Alexander looking to get as many of her players out on the court, there were changes ahead of the third quarter with the likes of Caitlin Thwaites and Gretel Tippett coming on.

There were some anxious moments for Northern Ireland when Caroline O'Hanlon collided with Jamie-Lee Price and hit her head on the court. A medical timeout was called as a clearly concussed O'Hanlon was checked over before she walked off the court.

Australia continued to make use of their abundance of space to make their way down the court throughout the second term but the Diamonds will be wanting to convert some of their deflections to intercepts in the coming two games.

The depth the Diamonds have in their squad is scary.

All 12 players that came to Liverpool had a run on the court with no one looking out of place.

The Diamonds will be back on court tomorrow (Saturday, July 13) when they face Zimbabwe at 6pm AEST. 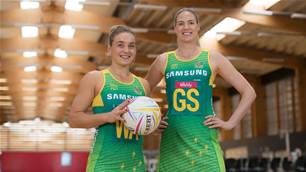