Eight years ago at the New Dehli Commonwealth Games, an 18-year-old rhythmic gymnast Danielle Prince stepped onto the floor to perform in her first major international tournament.

Now at the age of 26, Prince will be competing in her third Commonwealth Games.

"It is pretty exciting and I can't believe it has already been three Commonwealth Games," Prince said.

"it's a huge honour to be able to represent Australia for such an extended period of time," she said.

When she was young, Prince loved dancing which prompted her dance teacher to suggest that she try rhythmic gymnastics and she fell in love with the sport the moment she saw it.

Her mum took her to her first gymnastics class and she saw these girls, who would end up being her training partners, doing a routine.

"As soon as I watched them I knew," Prince said

"I said 'mum this is what I'm doing and I'm going to go to the Olympics'."

Prince is now one of the most experienced members on the Australian team for the Commonwealth Games, having represented Australia at Dehli 2010, where she won team gold, Glasgow 2014 and she was the sole Australian rhythmic gymnast at the Rio Olympics.

However, winning that gold in Delhi was something truly special. 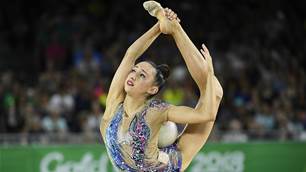