There are still 458 days before the first ball is kicked at the 2015 FIFA Women's World Cup but today the Matildas take their first steps on the Road to Canada.

There are still 458 days before the first ball is kicked at the 2015 FIFA Women's World Cup but today the Matildas take their first steps on the Road to Canada.

Running annually since 2008, the Cyprus Cup is 12 team competition featuring a number of Top 10 teams in the world.

This is first time Australia will participate in the tournament with head coach Hesterine de Reus considering it a vital part of the Matildas Asian Cup preparations.

“It's a fantastic opportunity for the players to step up from the W-League level, where the demands are a bit less and the intensity is a bit less,” said de Reus.

With the tight timeframe between the conclusion of the W-League and departure for Cyprus, de Reus' squad heavily features players who have performed well in the recent W-League season.

With only two players premiers Canberra United feel, with some merit, hard done considering the strong performances across the park and, in particular, from their defensive players.

Gaining the most benefit

Firstly, it provides four guaranteed competitive matches against Top 20 countries of distinct and divergent styles; styles that mirror those of upcoming AFC opponents.

Secondly, the extended squad and amended rules (six substitutions are allowed per match) gives the option of evaluating several players at the international level.

“It's a training camp; it's a very tough schedule so we also will give many players an opportunity to play matches,” de Reus said of the tournament.

“It's a good chance to see how you [the Matildas] play against the different styles and so we can further develop our playing style relating to the opponent.”

Australia has been placed in Group B alongside France (the highest ranked country in the tournament), the Netherlands and Scotland.

All three have distinct styles, pose different challenges and have world class players for the squad to overcome.

The first group game pits the Matildas against the country de Reus' represented 43 times, the Netherlands.

The Dutch are an emerging nation in women's football and, although they are surprisingly yet to qualify for a World Cup, they could be one of the nations who benefits from the increased World Cup spots for UEFA in 2015.

The last time Australia met Oranje Leeuwinnen was prior to 2013 European Championships with the Matildas falling 3 – 1 to the home side.

Like many European sides the Netherlands are structurally solid and defensively sound. 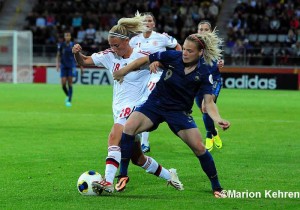 As on the last occasion they met, Australia can expect to have a large portion of the possession with the question being can they use it better than they did last time.

Game 2 sees a rematch of the July "snatch and grab" when the Matildas defeated World No 5 France.

In that encounter brilliant goalkeeping from Brianna Davey and Lydia Williams, backs to the wall defending and a rearguard action led by Katrina Gorry saw the Matildas prevail 2-0.

One of the most aesthetically pleasing sides to watch in world football, France will ask different questions of Australia.

As with the likes of Japan and South Korea in the Asian Cup, the Matildas will likely see minimal time on the ball.

Once again the changes de Reus has implemented in defensive structure will be put to the test.

And a significant test it shall be.

Les Bleues possess some of the most creative and technically gifted players.

“France and Holland, they have a bit of a similar style of playing.”

“Holland is a bit more leaning back, a bit more focus on defending first.”

“France, they play the same system but they are a much more attacking team, a skilful team.” 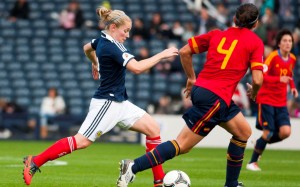 The final group match brings the unknown challenge of Scotland.

Managed by former Swedish international, and one of the applicants for de Reus' current job, Anna Signeul, the Scots are another nation working to build a strong women's football program.

Scotland plays the traditional European game with physicality a feature.

“It is important to us to see how that affects our style of play and we have to strategy a bit to play against the two strikers system.”

Win all three games and the Matildas would be set to play off against the winners of Group A.

While good results won't be sneezed at, de Reus has made it clear strong performances are the objective of this tournament as she looks to narrow down to a final squad for the Asian Cup.

The format of the Tournament will be three groups of four teams, where each team in the group will play each other once.

This will be followed by a finals day where –