Last season’s Champions Melbourne City are one step closer to their fourth consecutive finals appearance after defeating Sydney FC 2-0 on a windy Thursday night in Wollongong.

It was fate: last season's grand finalists Sydney FC and Melbourne City meeting in the final round of the regular season to determine which of them would secure their spot in the 2018/19 finals series.

Both teams had it all to play for.

Sydney were well positioned to place one hand on the Premiership trophy, coming into the match only one point off top spot on the ladder.

City, on the other hand, were facing an unfamiliar situation: they sat in fifth spot, three points behind both Sydney and Perth Glory. The possibility of missing the top four for the first time in their history.

As expected, the visitors dominated possession early and had several more shots on goal than the hosts in the opening period. City’s control of the game was helped by the strong southerly wind they had at their backs, making it almost impossible for the Sky Blues to clear the ball out of their own half.

City were finding most of their momentum down the right wing through American Jasmyne Spencer, whose speed allowed her to skip easily past her markers to either send crosses into the box or cut inside to shoot for herself.

However, Sydney appeared comfortable sitting in a deep defensive block and letting City pile on the pressure, clearing crosses and blocking shots from all angles.

Sydney’s full-backs in Huerta and Harrison were more reserved than usual, only making a handful of attacking runs all game, making it that much harder for City's own full-backs in Steph Catley and Teresa Nielsen to flood forward and overload either side.

This defensive decision meant Sydney had to play on the counter, relying on American Savannah McCaskill and Matilda Caitlin Foord to hold the ball up and then play it through City’s stretched back line.

This counter-attacking mindset almost paid off early as McCaskill sent a slicing pass through the City defence to put Princess Ibini-Isei on goal, but the winger’s thundering shot was pushed over the crossbar by Lydia Williams. 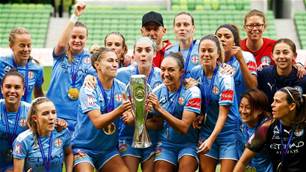