MELBOURNE, Australia — For the second time in as many years, the Matildas are heading for a two game series in Victoria.  This time the opponent is world no. 13 and former Asian powerhouse China PR.

MELBOURNE, Australia — For the second time in as many years, the Matildas are heading for a two game series in Victoria.  This time the opponent is world no. 13 and former Asian powerhouse China PR.

Between 10,000 and 12,000 fans are anticipated for the first match and the architecturally splendid AAMI Park.  While it would be the biggest crowd for a Matildas stand alone game in Melbourne, it would fall short of the September marks set in Sydney and Newcastle.

For Australia, they are looking to extend their eight game unbeaten streak in 2017.  It is a streak that - although it is an "off" year for women's football - has included several big name scalps.

It's an opportunity for the Australians to continue to build momentum as a team heading into three big years. 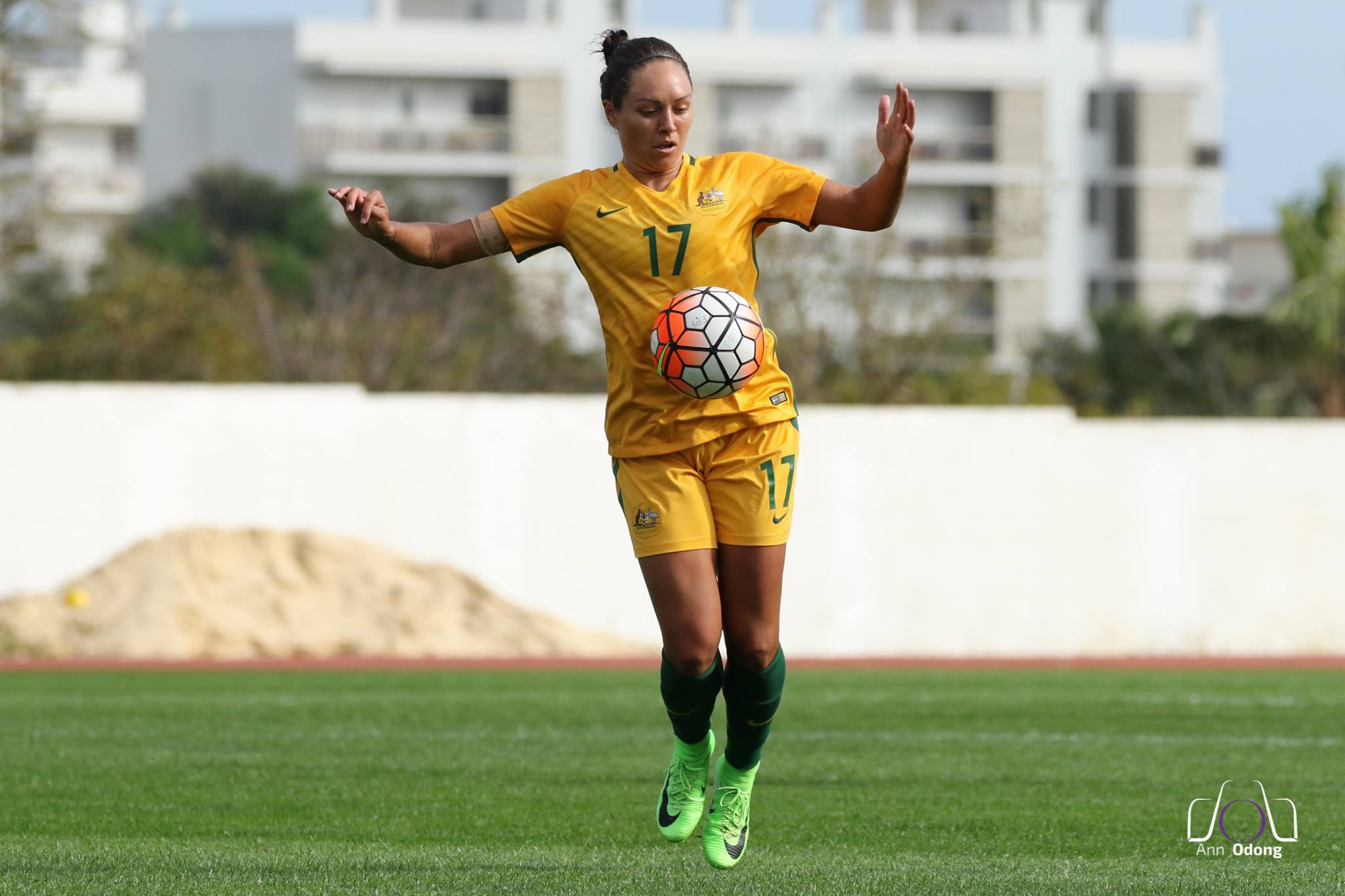 Most of the selections have been plucked from the W-League. One advantage of this is that, unlike the recent friendlies against Brazil in September, only German based Elise Kellond-Knight and Japanese based Caitlin Foord will be battling the scourge of jet lag.

A substantial portion of Alen Stajcic's squad has played a majority of the 2017 matches but this final squad has several notable inclusions.

After sustaining an injury mid way through the 2016/17 W-League, it was a "horror" run (her description) for Michelle Heyman to return to full fitness.  Heyman is back playing for Canberra United and more importantly scoring goals for United.

Also back from injury is forward Kyah Simon.  With no major tournaments on the horizon this year, the 26 year old took the opportunity to address her troublesome shoulders - which had a nasty habit of popping out mid-match - and underwent reconstructive surgery on both.  Again Simon has had a successful return, back in the W-League and scoring goals for new side Melbourne City.

Another of the bad injury run returnees is Simon's City teammate Larissa Crummer.  Crummer also suffered ligament damage towards the end of 2017 and, after pushing to return for Season 9, suffered another setback which ruled her out for City's back-to-back championship.  After rehab in the United States with Seattle Reign, Crummer too has returned to scoring with goals for Seattle Reign towards the end of their NWSL and for City with three goals in the last two games.  All three bolster Australia's already considerable attacking talents.

Stajcic will have a full squad to call upon in the first match, although Lydia Williams may be unavailable after returning from the US wedding of former Houston Dash teammate Morgan Brian.  If that is case, Mackenzie Arnold would be most likely to take the gloves.

Arnold played the last time Australia met China so it would not an unfamiliar task for the Roar custodian.  However, it would be interesting to see if the new face to the Matildas squad, Adelaide United goalkeeper Eliza Campbell, pushes for a start.

A former Young Matildas starting goalkeeper, Campbell has been rewarded for her strong start to the season.  Although she has been called up to Matildas camps over the past 2-3 years, this is the shotstoppers first senior squad call up.

The last time these two sides met was at the Algarve Cup.  Despite a good start to the match, China hit Australia against the run of play to take a first half lead through Wang Shanshan.

After the break Australia hit back through Emily Gielnik - who was impressive in that tournament - before the Matildas earned a deserved victory through a late header from Ellie Carpenter.  It was the teenager's first goal for the Matildas and one that helped Australia take top spot in an Algarve Cup group that included Sweden and recently crowned European Champions, the Netherlands. 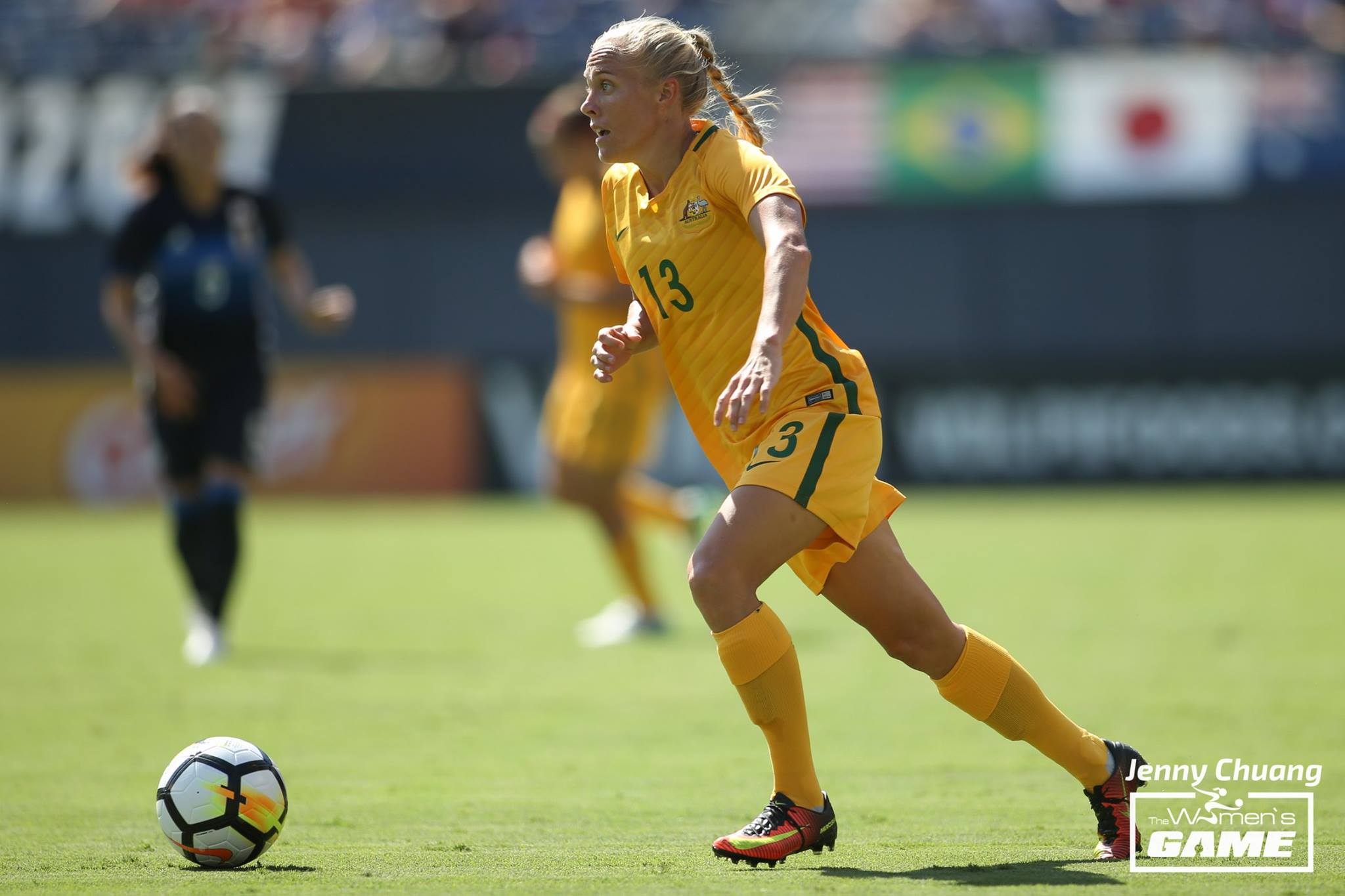 Tameka Butt at the 2017 Tournament of Nations (Photo: Jenny Chuang)

Obviously one of the players to watch is Matildas forward Sam Kerr who in 2017 has netted a pretty impressive 33 goals for Perth Glory, Sky Blue FC and the Matildas. 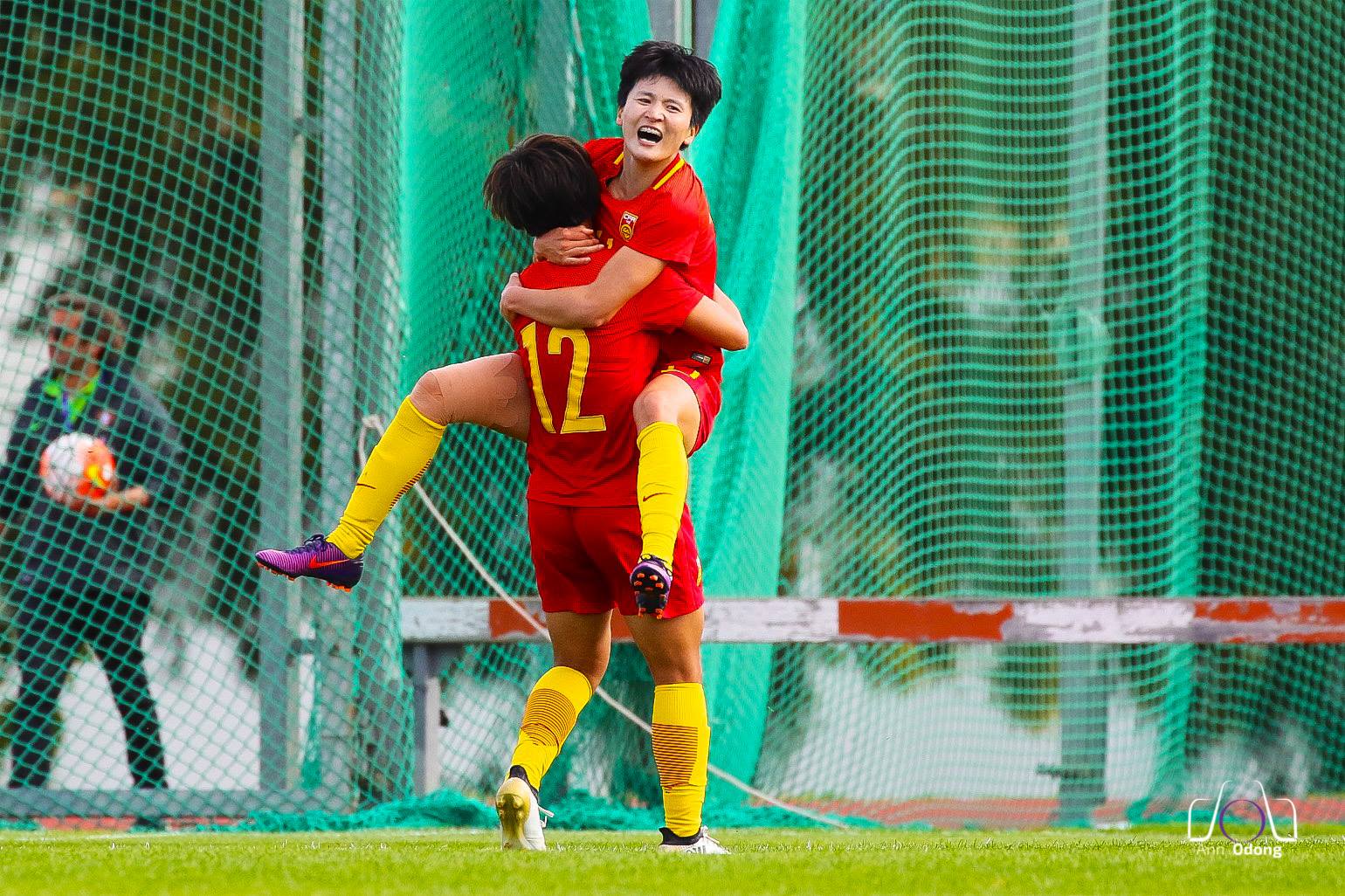 China have a host of up and coming players who could see them return to the upper echelon including their superstar Wang Shuang.

However it has been forward Wang Shanshan who has driven China's results in 2017.  The 27 year old has scored 7 times for China in 2017 including against Australia at the Algarve Cup.

Wang is good aerially but where is causes damage is through her smart movement in and around central defenders, often finding space between the pairings and making the most of it with her extremely clinical finishing. 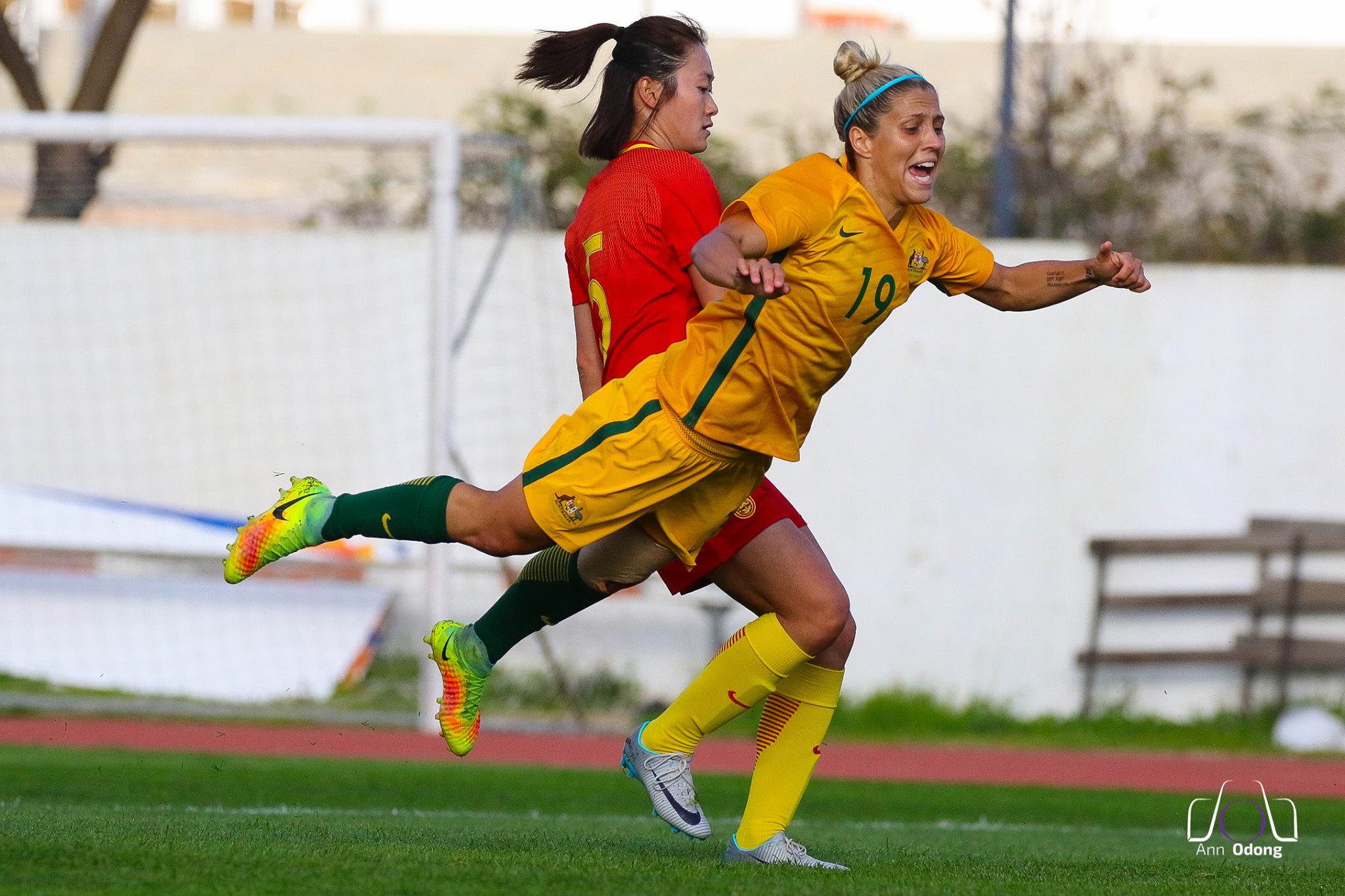 Katrina Gorry should be in the thick of the action (Photo: Ann Odong)

For China, this will be their first match under their newly appointed Icelandic head coach Sigurour Eyjolfsson.  Eyjolfsson takes over from Frenchman Bruno Bini and becomes China's eight coach in 10 years.

Alongside Eyjolfsson on the Steel Roses bench will be a legend of the women's game - and joint FIFA Women's Player of the Century - Sun Wen.  While the United States got all the plaudits in 1999 for winning the World Cup, it was Wen who lit up the tournament earning the Golden Ball and Golden Boot as she led China to the silver medal.

For all of Bini's faults, the Frenchman brought some of the french style to China's game.  The Steel Roses play an attractive, fluid style of football with the ability to transition quickly into attack.  In many ways, they have similar attributes to the Matildas.

The key battle will be the midfield between the two key playmakers Katrina Gorry (Australia) and Wang Shuang (China).  Both players are the metronomes for their sides and with their ability to slice defences with a pass or put teammate on their way, this should be an enjoyable battle to watch.

Although quick themselves, China are equally susceptible to pace.  In their last meeting, Australia used their speed down the flanks - through Carpenter and Gema Simon - to unnerve the compact Chinese defence.  Time and again a well executed reverse ball opened up the Chinese defence and Australia definitely has that pace available to them with any number of combinations of Kerr, De Vanna, Catley, Carpenter, Foord or Raso out wide.

Another opportunity for Australia will on set pieces.  2017 has not been a good year for China's set piece defending with a host of goals conceded from their hesitance in clearing the danger.

As for China, they pose a threat many threats, particularly on the counter attack.  With their excellent technical ability, the Steel Roses have the nous to play out of pressure with a minimum number of passes and explode out of defence.

"Their technical skill are as good as any Asian team. I would put them up there with Japan almost in terms of their technical capabilities so I expect that kind of game from them."

It is that exact move that caught out Australia at the Algarve Cup,  And with Wang Shanshan, Wang Shuang and Xiao Yuyi, they have the players to finish the chances they do create.

"We know what to expect but that doesn't make them any easier to play against."

"We know that their two strikers are phenomenal players so they will provide tough competition for us but I am pretty confident that if we play our game, play the way we have been playing the past five or six months that we will be able to get on top."

Tickets are still available to the clash and can be purchased via https://matildas.footballaustralia.com.au/tickets

Fox Sports continues their commitment to women's football with the match live on Fox Sports 501.

They are joined by SBS who will air the AAMI Park clash on SBS Viceland with the match streaming on The World Game app.

Unfortunately for international viewers, it is all geo blocked but of course, you can also follow all the pre match, match and post match action via The Women's Game twitter.