A Matildas mainstay for some time Steph Catley is hardly an unknown name however she doesn’t often step into the spotlight.

Saturday night's match was no exception with Catley taking to the field despite having broken her hand a few days earlier.

“I broke it in the Jamaica game early on in the second half. I got it scanned the day after the Jamaica game. It was numb, we put a little jab in there, so I couldn’t feel it- it is a little top heavy but it didn’t distract me at all,” she said.

It was key that this injury didn’t distract Catley as she was continuing to play, as she has all tournament in the unfamiliar position of centre back.

“It’s not a position that I’ve grown up playing, it’s definitely still new and I’m still learning and still trying to perfect the craft but it’s good to be versatile and that’s what tournament football is about.” 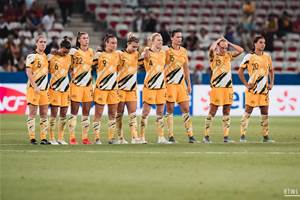 The Matildas fell to Norway in a penalty shootout in the Round of 16. Rachel Bach (@bythewhiteline) was there to capture the action.

For Catley, it wasn’t about herself as an individual and her preference for a particular spot on the park but playing where she could best benefit the team.

Catley admitted that the result may seem like it was far from the Matildas best as they had a belief in their capability to go much further into the tournament.

“We had big goals and big expectations coming into this tournament and we’re capable of really amazing things when we’re playing well so I’m just devastated for the girls but I think we fought really hard tonight and showed some incredible character.”

The character demonstrated by the team is the major takeaway that Catley has from this World Cup campaign.

“I think that’s something that you can’t teach and that you can’t coach and that just makes me really proud to be a part of this team. To know that we’re capable of fighting and grinding results out like that and tonight didn’t go our way but we fought as hard as we could.” 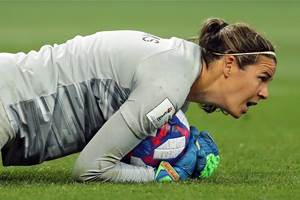 Williams a stand out against Norway

While the Matildas loss was a devastating blow for the team and fans, it is impossible to look past the exceptional performance by Lydia Williams.

This character will be tested again very soon as the team begins preparations for Olympic qualifications.

“Once we get it all together and fix everything we need to fix we’re going to be ready for the Olympics next year. That’s the next major tournament so we’ll be looking forward to that. We’ve got to qualify and those qualifiers are going to be in a different format so we’ve got to prepare ourselves for that.”

A part of this preparation will be trying to get in as many games together to give the team more time to focus on areas that need to be fixed and create positive momentum going forward.

“There’s lots of things, it’ll be nice just to get lots of games together and play together quite regularly and just go in positive for that tournament.”

While Catley is devastated to be bowing out at a relatively early stage of the tournament she believes that the team has still been great ambassadors for women’s sport and growing the game at the grassroots level back home.

“I think this team is really special, I think there’s lots of women in this team that girls can look up to and see as idols and people that they want to be like. So it’s pretty cool and I just hope that Australia are still proud of us.”