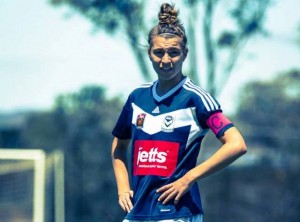 Not that long ago Stephanie Catley was a pretty normal teenager; attending high school and football training during the week and playing football matches on the weekends.

That routine was broken up with occasional trips interstate with the Victorian state team for the National Football Championships or, once a year, a trip to Asia with the U17s and then U19s Women's National Team.

Three years down the track and Catley has picked up 16 caps for the Matildas while cementing her place at left back, an unprecedented two FFA U20 Player of the Year awards and recently named as the Melbourne Victory captain.

You were selected by Dave Edmondson as the captain.  How have you found him as a coach and what are the key differences in his style of coaching from your previous experiences?

Dave has been amazing. He came in and we had a lot more time with Dave compared to other coaches. With Dave we’ve had a whole preseason and everyone understands exactly what they’re doing and he’s very clear about what he wants. He’s very easy to learn off and really passionate and everyone follows his lead.

It’s a little bit old news now, but in regard to captaining Melbourne Victory, how have the team responded and have you got a mentor to go to when things get rough?

The entire team is supportive. In terms of a mentor, Jess Fishlock is an amazing leader and is supporting me every day. I’m still learning and I can learn from her every day.

Speaking of rough, it wasn't the best start to the season.  In Round 1 against Sydney FC it seemed like there was confusion in everyone's roles.  How did the team process that match and bounce back?

Round 1 is almost one we’re trying to forget. It was almost like some of the less experienced players didn’t know what to expect from a W-League game.

It all went wrong and I don’t think you will see that kind of performance from us again. We were doing things that were completely out of character. Sydney played amazingly.

You have had three wins in a row but you now face Sydney FC once again.  How do you break Sydney FC down for the next match?

We’ll have the right mentality going in. You won’t see a repeat performance of the first round. Their strength is in their attack and we’ve been working on our defensive players. We’ll be a lot stronger. We’ve added to our attack with Jess Fishlock, and Lisa De Vanna has been here a couple of weeks longer.

You have played with and against some international class footballers, who do you think is the most influential football player in the W-League? 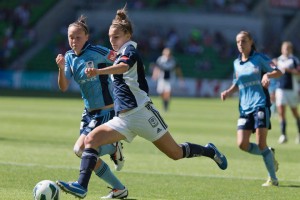 Best player I’ve ever played with is Jess Fishlock. She knows so much about the game. We watch tapes and see how hard she works and how well she can read the game; it’s just crazy. I don’t really think she gets enough recognition on the world stage.

Who do you enjoy playing against?

I remember last year in the Grand Final I had to play against Caitlin Foord. We were both full backs. I really enjoyed that battle. It’s never easy. We both like attacking and we wear each other out because we were trying to attack so much.

Are you ever going to change position? Have you changed already?

I started off junior career as a left midfielder. I came into my first national team camp (U17) under Gary Philips. We had a lot of injuries and we had an international friendly against Japan. That position was vacant and he slotted me in there and I literally haven’t changed since.

I really love being a full back. It allows me to go forward which is my favourite thing to do.

The club have made some great strides off the pitch but Melbourne Victory is one of the only teams that doesn’t have W-League memberships for fans.

In terms of engaging the fans and driving the W-League even more, it’s a gap. Any comments?

I wasn’t aware that we were one of the only teams that didn’t have them. It’s definitely necessary. In past years we haven’t even had sponsors and we were really wrapped about that. That’s a step forward. Definitely getting memberships in future years would be great. Something we should definitely look into.

What do you hope to see for W-League in season 6?

It’s my fifth year and the W-League is already growing every single year. To see where it is now in terms of how much media attention it’s getting, it’s still not a great deal, but it has come so far and I think it will keep growing. The football is getting better and better every year and more players are coming over. That can only help the game.

For Victory it’s the same, we’ve got the captain of Wales, Jess Fishlock, playing for us. She is one of the best players in the world and so is Lisa De Vanna. We love having them there.

You are establishing your place at left back in the Matildas in the lead up to the 2014 Asian Cup.

How are do you feel the Matildas are tracking and what did you learn from the recent matches against China? 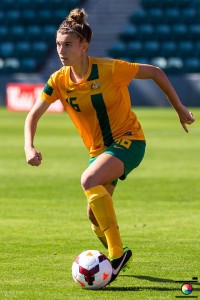 As a team we finally started to come together in terms of our defensive structure and we started to see everything we’ve been working on in camp and training come into it. China are a great side.

To verse an Asian team coming into to the Asian Cup is really good and it gave us a bit of confidence to get two wins out of that.

What are the major differences between W-League and International football?

Is the defensive structure in the Matildas similar to what you have in the Victory team?

It’s a very different style of play from international football to W-League. Different players, different structures so I suppose it all varies a little bit. Same sort of mentalities are there.

What are you hoping to achieve yourself this year? Are you looking to play not only more international matches but also to play overseas in North America or Europe?

I’m definitely looking to go overseas for a club. It’s about timing. There’s a lot going on with the Matildas, especially in the first half of the year with the Cyprus Cup and then the Asian Cup.

I’ll be at home most of the year next year for first half and then I’m looking to go somewhere in the second half of the season. I’m undecided about where, but I wouldn’t mind going over to America or anywhere in Europe. I’ve got to figure out a few things and talk to Hesterine [de Reus] about it.

Kyriacou cashes in before LPGA mission