The last three years have been a whirlwind for the globetrotting Jessica Fishlock.

The last three years have been a whirlwind for the globetrotting Jessica Fishlock.

In following the beat of the football drum, the 27 year old has been busy captaining Wales as they attempt to qualify for the World Cup, becoming a beloved player at Seattle Reign alongside the likes of Hope Solo and Megan Rapinoe or battling through injury to anchor Glasgow City in the UEFA Champions League.

Sometimes called the Tiny Dragon, Fishlock has also quickly become one of the most well-known W-League players and, despite interest from several clubs, we've claimed the diminutive midfielder as our very own Melbourne Victory girl.

Returning to the W-League, did you ever consider a team other than the mighty Melbourne Victory?

There were a few teams this year that were interested but for me, I have a connection with Melbourne and I had a great time last year.

When it came down to it, I couldn’t agree to any other side.

"It felt really wrong to come back to the W-League and not stick with Melbourne."

What does the W-League give you that other leagues do not? Is it particularly the timing of the league that is a drawcard?

Absolutely for me the timing of the league is perfect and it’s a challenge as well with the heat.

It’s intense training. It’s like hot weather training and that helps when it comes to getting your fitness right. If you can play and train at a high intensity in such high heat then that helps you anyway.

For me it helps when I get to Seattle and it’s like a pre-pre season and there’s no better way to do that than playing and training.

Flipside, what is the W-League missing? What improvements would be good to see?

Right now there’s a gap between top teams and lower teams. Moreso than last year. Need to close that and amongst the squads as well. That just comes with development and that’s the point of the league. 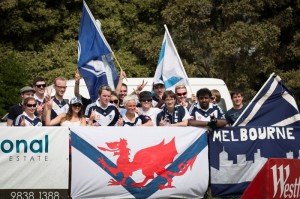 Is it a similar problem with the NWSL?

There’s a gap because of national team players and young college players, but the gap isn’t so prominent. It’s much smaller.

That’s to be expected because it’s such a huge pool and their pathways, even if they are college and they’re coming in to the NWSL, they’re still 23, 24 years old. Whereas at the moment, as an example, take Steph [Catley], she’s our captain, she’s a Matilda and she 19.

Anywhere else in the world she’d still be a kid somewhere learning her trade and developing but at the moment, due to depth, you’ve got someone who should probably not have the world on her shoulders and still learning and developing and enjoying.

Not that she doesn’t enjoy it but you know there’s a lot of pressure on her right now but she’s doing really well.

From what I’ve seen from last year and this year, there’s definitely the development and improvement and with the internationals and players that are coming into the league, that will only help young matildas and the youngsters.

Are there any noticeable coaching differences in Australia where you’ve been coached by Dave Edmondson and Mike Mulvey compared to the UK, Europe and the US with someone like Laura Harvey in the NWSL?

The coaching is not a lot different but there is a different way of playing. The structure and discipline when it comes to shape is not really the best.

It tends to be gung ho, which isn’t a bad thing, but the shape and balance of the team is a little bit all over the shop when you tend to do it like that.

That’s just the way that football is played here right now which is extremely different to the way it’s play in Europe where it’s very shape, possession based football.

That’s why I know, this is a compliment to Canberra, their shape was fantastic on the weekend.

I felt that their shape and structure was the best that I’ve seen in the W-League. For me I don’t think it’s a coincidence that Lisbeth [Migchelsen] was there and I know from when I played with her in Holland.

You can see what she has brought to that team’s structure and discipline.

Are there any overseas players that you would target to come to the W-League for Season 7?

I’ve spoken to a few people about it and I know that there are a few people that are keen and looking forward to it.

For the same reasons that I’m here, they would be here too. You’ve got the likes of Lori Lindsey at Canberra and Nadine Angerer at Brisbane.

"There’s a lot of appeals for the W-League around the world, it’s just about getting organised earlier."

I speak very highly of the W-League and I know a few people who would be more than happy to come and play for it because like you said, it just fits around the seasons so it has nothing to compete against really so it should be a base of quite a good few internationals.

Some of the players are quite young and you can see talent but some of it is quite raw. What kind of advice do you give to someone like Stephanie or Emma Checker who’s only 18? 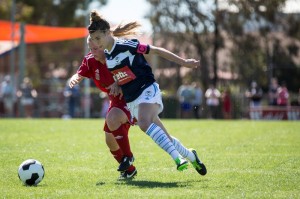 If you were to take Jess Humble out of that five, our defence is extremely young. Hoyle and I we try and protect them as much as we can but also allow them to play because that’s how they’re going to learn and develop.

Hoyle and I have quite a bit of fun in the middle. It’s fun to work with them.

What pressure, if any, do you feel as a marquee player for a W-League team?

So it’s a bit of pressure because obviously you’ve still got to find a way to make an impact despite all of that. We’re lucky that we have a good strength in a lot of areas in our side right now.

It’s expected and I don’t mind it that much and it just makes me have to play better which is always what you want.

Speaking of heavy challenges, did you get your tooth fixed from the match against Canberra?

I don’t believe it. I’m devastated. I can’t wait to go home just to get it fixed. 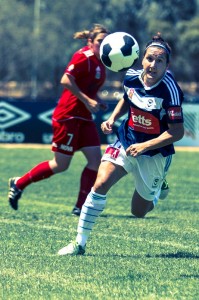 Who has the weirdest pre game ritual?

Lisa [De Vanna] just tends to rock up as and when, so we never know.

"It’s a god send when you see Lisa walk in the door and you realise that she knows she has a game today."

G [Gulcan Koca] is the DJ, but I give her a little bit of credit, she’s pretty decent.

Coming up to the latter stages of the W-League, is there anything that gets a little bit different with thoughts of the finals coming up?

Your mentality does change a little bit. For us now it’s not so much getting into the top four, you could say it’s more to the point of being able to maintain and close off our games now so we’re secure in the top four.

For us right now, it’s realising that we’re in a good position, but we are still realising where we need to improve where we’re not doing so well and keep working.

We’ve got quite a good group, De Vanna, myself, [Katie] Hoyle who can understand that and can work with that. We’ve got a young side so we have to make sure that we manage the mentality for us all.

What’s next after W-League? Wales play a couple of friendlies against Romania and then a World Cup qualifier against Turkey. Are you going straight to that?

It’s such an unfortunate calendar. The international calendar and club calendars never fit.

Wherever you go, whatever you do, especially in Europe where we obviously have our campaigns that run over about 18 months.

There just seems to be games all the time really and at the most inconvenient times with regards to your clubs. It involves a lot of travelling.