Mahalia Murphy and Charlotte Caslick will return to the Australian Women’s team for the Kitakyushu 7s next weekend.

Caslick has been unavailable for selection since injuring her hand at the Dubai Sevens last year and will make her International return in Japan.

“It’s been a long time since the HSBC Sydney 7s and the squad have had the best training block we’ve on the past twelve months," Head Coach, John Manenti said.

“On the back of that, this was the hardest squad I’ve had to select and gives us great confidence going into the tournament.”

Australia will meet China, Spain and Canada in Pool B as they look to progress to the finals as they chase valuable World Series points.

The Aussies are presently fourth on the ladder on 46 points, in a tight tussle with Canada to rein in the USA and New Zealand.

Only the top four sides at the end of the 2018/19 Series will qualify automatically for the 2020 Olympic Games in Tokyo.

Not considered for selection due to injury was Demi Hayes, Dom Do Toit and Shannon Parry. 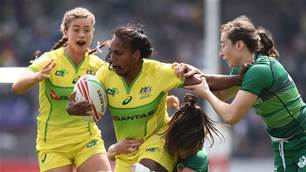 Aussies go down fighting in Kitakyushu