Sydney FC goalkeeper Casey Dumont could be set to crown her comeback to football with a first international cap for the Matildas.

Sydney FC goalkeeper Casey Dumont could be set to crown her comeback to football with a first international cap for the Matildas.

For the 22 year old, it would be the culmination of a two year journey which has seen her fight back from a debilitating case of osteitis pubis to return to the W-League and now the Matildas setup.

“It's awesome,” said Dumont of her return to camp.

“You set your goals to get back into it [the Matildas] but I didn't think I would jump back in straight after the W-League.”

While Dumont might have had some doubts on her Matildas return, increasingly throughout the 2013/14 W-League season, many observers did not.

From the first match for Sydney, the custodian was a crucial part of the Sky Blues defence whether in a sweeping role or with her shot stopping.  Dumont also played a role in Sydney's record breaking 37 goal season as time and again her distribution, by hand or foot, launched Sydney attacks resulting in some of the best team goals the W-League has witnessed.

“Just getting a cap would be great and to play in front of your home crowd against a world class team like Brazil would be so amazing.”

The inevitable result was a call up to the Matildas for the first time in almost three years.

“It was unexpected,” she stated.

“That was my main goal and I wanted it, but I didn't think it would happen so quickly.” 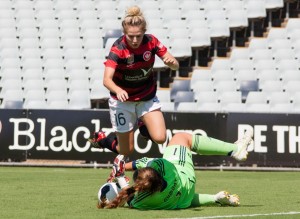 “When I came back from my injury, I had little goals; to get back into the W-League and then to get into Matildas camps.  Those have been happening which I have been really stoked about.”

While things have changed considerably since Dumont was last in camp, namely a new head coach in Hesterine de Reus, new assistant coach in Ante Juric and a new goalkeeping coach, there is also a sense of familiarity for the long time national team member.

“There are new faces so that is always good and there are new things but many things are the same.”

“The girls are always welcoming. They have been really supportive so that has made it easier.”

Another of the changes Dumont notes is an increased intensity in camp with the squad training up to twice a day, conditioning sessions and, for Dumont and her fellow goalkeepers, 'keeping sessions.

With load a major factor in Dumont's injury, the coaching and medical staff have monitored her closely, modifying her schedule as required.

“The sessions are a lot harder and the level is definitely a step up but my injury has been great and the medical staff have been amazing.”

“They double check things but I am training most days.  Even when I am resting, I still do half a session.”

“It's definitely working and my level of intensity and my skills have improved as well.”

Selection in Australia's Cyprus Cup campaign, although she didn't get on the pitch, has been followed up by this week's selection in the two match series against World No. 6 Brazil.

A veteran of an Asian Cup and a World Cup, Dumont finds herself the veteran of this week's goalkeeping group that includes fellow former Young Matildas Brianna Davey and Mackenzie Arnold.

Working with former teammates has assisted Dumont to re-integrate back into the national team, although she finds herself in the unusual situation of receiving match day advice from the younger Davey and Arnold. 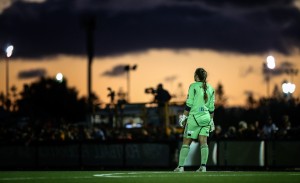 “It's funny because I am the one that doesn't have the international cap,” laughed Dumont.

“There is good competition and they [Davey and Arnold] push each other and they definitely push me.”

“We bring all different things which is every good so Hesterine has more options.”

With Davey and Lydia Williams, who is not available for this series and currently in the US with NWSL side WNY Flash, all but locked down for the first two (of three) goalkeeping positions in the Asian Cup squad, the two match series gives de Reus the opportunity to have a look at Dumont in a competitive match.

If that were to occur, it would be a momentous occasion, particularly in the city where it all kicked for the Dumont as a talented 16 year old with the Brisbane Roar.

“Just getting a cap would be great and to play in front of your home crowd against a world class team like Brazil would be so amazing.”

“I can't think of one word that would describe the feeling.”

“I just have my fingers crossed and hopefully Hesterine will pick me.”