Sydney FC goalkeeper Casey Dumont is set to be out after sustaining a lacerated liver in the weekend's clash with Perth Glory.

Dumont, who has arguably been the best goalkeeper this season, suffered a number of hard knocks in the Round 6 encounter with the last on the hour mark forcing the custodian to be substituted. 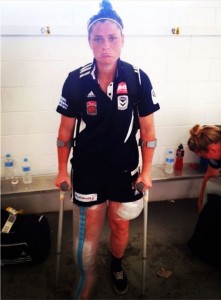 A lacerated liver, a tear or cut in the liver, means Dumont could potentially be on the sidelines for a number of weeks but Sydney FC have informed The Women's Game that they will not aware of the full extent until later in the week.

It is not the first time this season that Dumont has taken a hit with the 22 year old suffering bruised ribs as the result of a clash in the Sky Blues' Round 2 fixture with her former side Brisbane Roar. On that occasion the shot stopper played on despite her obvious discomfort.

It was a big round for collision injuries in the W-League with Dumont's Matildas teammate Brianna Davey also substituted after some heavy collisions in Melbourne Victory's 1-1 draw with the Brisbane Roar.

While sore, Davey is expected to be available for this weekend's big encounter with Canberra United at Etihad Stadium, a curtain raiser to the A-League Melbourne Derby.

In that same match Brisbane defender Kim Carroll required 5 stitches post match to close a gash she received from a head clash with Victory's Amy Jackson.

Despite the wound, Carroll went on to play the full 90 minutes. 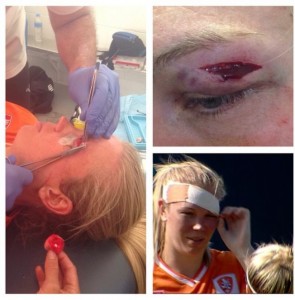