Inaugural Carlton marquees Darcy Vescio and Brianna Davey have re-signed with the club for the 2019 season.

Davey, who was appointed captain earlier this year, ruptured her ACL in Round 2 against the GWS Giants but despite injury she continued to support her teammates from the sidelines, playing a key role during training and match days.

Vescio made her AFLW debut season opener in 2017 and hasn’t missed a game for the Blues since.

The 24-year-old, was the League’s inaugural leading goalkicker and was awarded All Australian honours in the same season, as well as claiming the Mark of the Year.

“We’re delighted Bri and Darcy have recommitted to the Club for the 2019 season, and I’d also like to thank MC Labour for its dedication to our women’s program,” AFLW senior coach Daniel Harford said.

“Bri grew in her role as captain throughout the year, and despite being injured, she continued to have a positive influence on her teammates and upheld a club-first attitude.

“Darcy is a talented individual with a strong work ethic and her desire to keep improving as a player is a credit to her, so we’re rapt she’ll continue her career at Ikon Park,” he said. 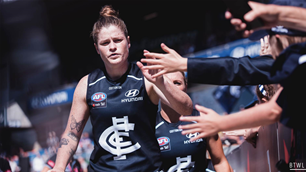 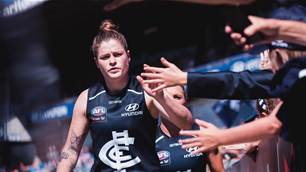