Wallaroos captain Grace Hamilton has helped her side to their first Test series win on home soil after a 46-3 win over Japan on Friday night.

In front of 3391 vocal supporters at North Sydney Oval, Australia scored seven tries with Hamilton being named Player of the Match after crossing for three tries.

“We said before the match that we wanted to make a statement and we did," Wallaroos coach Dwayne Nestor said.

“We wanted them to be ruthless in both attack and defence and they were. Throughout the week we have been working on spacing and all the work we did in training showed tonight in how comfortable the girls were playing."

The Wallaroos struck first in the match with the boot of Lori Cramer before a  line-break from Hamilton saw the host side ahead with a 10-0 lead.

Japan's penalty was their only points of the match despite a hard-fought effort from the world No.16's.

While Australia had a solid lead, a yellow card to Cramer for a shoulder charge saw the Wallaroos a player down in the second stanza and in a hardened back and forth contest between Japan.

Cramer, Mahalia Murphy (2) and Millie Boyle all found tries during the match on August 10 and 17.

"This is the best preparation we could have, we're so thankful we got to have it and Japan could come over here," Hamilton said.

"It's a big few weeks ahead but I have faith in the girls."

The Wallaroos have never beaten New Zealand in 16 matches dating back to 1994. 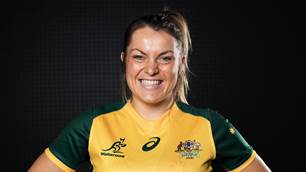