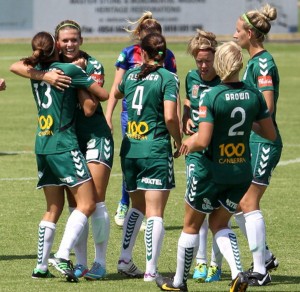 Canberra United has cemented its spot in the top four of the Westfield W-League with a convincing 3-0 win over Newcastle Jets in the Round 5 clash at Wanderers Oval, Newcastle on Saturday afternoon.

Canberra dominated from the opening whistle and had two goals within the first 12 minutes with Stephanie Ochs and Michelle Heyman netting.

The Jets fought their way back into the contest and were perhaps the better team in the second half before Ochs bagged her second goal to seal the win for the visitors.

The match got underway in hot and blustery conditions and it was the experienced Canberra side that controlled the tempo and the territory launching a number of dangerous attacks within the first few minutes that were scrambled to safety by an overwhelmed Jets defence.

Canberra profited from their pressure in the eleventh minute when Ochs took a lovely pass from Ashleigh Sykes on the edge of the box and curled her shot around a diving Eliza Campbell into the corner of the net for a 1-0 lead.

The visitors doubled their advantage just one minute later via a superb individual effort from Weyman who showed power and poise to push between two defenders and round Campbell before sliding her shot into an open net.

Newcastle were dealt a blow when attacking midfielder Madeline Searl limped off with a knee injury in the 15th minute, replaced by Jasmin Courtney.

Canberra continued to threaten with Heyman and Sally Rojahn going close only to see their shots saved by brave work from Campbell.

Newcastle eventually worked their way back into the contest with Rhali Dobson finding plenty of space on the left wing and creating opportunities for Gema Simon and Hannah Beard, but the Canberra defence was equal to the task to send their side to the half-time break leading 2-0.

The Jets came out with more determination in the second half and took the game to their opponents.

Dobson, who was the stand-out for the home side, continued to use her pace to great advantage down the left flank while Simon and Beard threatened in the middle but just couldn't find the back of the net.

Canberra sealed the win against the run of play in the 62 minute when Heyman broke down the right flank and crossed into the box where Ochs who buried her angled shot into the far corner of the goal for a 3-0 lead.

To their credit the Jets continued to press for an elusive goal with the best chance falling to substitute Adriana Jones, who got on the outside of Canberra left-side defence and strode into the box only to fire her angled shot into the side netting.

Down the other end Heyman went close when her lofted shot skimmed off the crossbar, Ochs saw her chance for a deserved hat-trick flash narrowly wide of the post while Campbell did well to save in a one-on-one with Sykes.