Buoyed by the confidence gained from last week's thrashing of Sydney FC in the derby, Wanderers produced a clinical second half display to sweep Canberra aside.

Denise O'Sullivan came back to haunt her former club as she chose an excellent time to score her first ever W-League goal.

In an even first half, it was Kyra Cooney-Cross who picked up where she left off by heading the Wanderers into the lead from a pinpoint Erica Halloway cross just before halftime, however, the second half was one-way traffic as the away side stepped up a gear and produced three unanswered goals through O'Sullivan, Kristen Hamilton & Lynn Williams.

Canberra will feel the scoreline didn't truly reflect the contest but they were simply outclassed in the second stanza by a side who will now surely have to be considered favourites for the title.

Produced a solid display and will be unsure how she conceded four. Was left exposed multiple times in the second half and could do very little to deny the visitors.

Had a quiet game, with Wanderers focussing down the opposite flank.

Was impressive in the first half as Williams & Hamilton were rarely seen, however she could do little to stop the onslaught in the second period.

Like Rasschaert, was unable to stem the tide in the second half as the away side ran away with it.

Had a torrid time trying to handle the likes of Williams and Hamilton, whilst also having to worry about the overlapping Holloway.

Produced another workhorse display in the middle of the park, but like her teammates, went off the boil in the second half.

Looked dangerous on the ball as always, but didn't see enough of it. Had a late chance to grab a consolation effort but couldn't find the target from a tight angle.

Always influential when on the ball, but rarely seen in the second half as Wanderers dominated.

Wasted two great opportunities to get on the scoresheet, but still led by example and worked her socks off before being withdrawn after 76 minutes.

Headed wide a glorious opportunity to open the scoring early, and then her main contribution afterwards was picking up a yellow for dissent after the halftime whistle had blown.

Her reward for scoring last week's winner was a starting debut in front of her home crowd and the youngster buzzed about and made some good runs, but often was isolated up front and outclassed by the likes of Huynh and Staab before being subbed off after 76 minutes.

Came on with 15 to go as Canberra chased the game and created a late opportunity for Charley, but otherwise could do little to impact the match.

Thrown on with Crofts as Garriock tried to change things, but the damage was already done and she could do little to change the match. Forced Smith into a decent save from a tight angle late on.

Brought on with four minutes to go.

Had very little to do asides from picking up a yellow for dissent in the first half. Was alert to keep out Canberra late on as she kept her third clean sheet of the campaign.

The skipper was a constant threat down the right side. Produced the assist for the opener, and was fantastic throughout the match.

Spent more time creating attacking chances on the back of her long throws than actually defending, but was a key contributor as she continues to impress in her debut campaign down under.

Did well to shut down Canberra's rare attacks, and then was virtually a spectator in the second period.

Enjoyed a tussle with Charley all night and did well to keep Canberra's top scorer quiet.

Playing against her former employers, the Irish superstar bossed the midfield and then produced a wonderful strike to double the lead. Was also denied twice by Khamis before grabbing her goal as she added some attacking intent to her performance.

The teenager once again impressed and scored the all-important opener for her side. Jury is out about her goal celebration though.

Helped O'Sullivan control the midfield, but was quiet compared to recent outings.

Quiet by her standards as she came off just before the hour mark with a possible knee complaint.

The American had a quiet opening hour as she struggled to impose herself, but showed her class in the final half an hour as she added another goal to her tally. Her first effort was well saved, but showed fantastic poise to skip past Khamis and blast past the defender on the line.

Like Williams, was rarely seen in the opening hour but then stood up to be counted. Unlucky to hit the post with a strike from the edge of the box, before producing a delicious turn to set up her goal. Her initial shot was blocked, but her follow up effort almost broke the net from an impossible angle.

The youngster was given half an hour and whilst she wasn't instrumental in changing the game, she was part of the turning tide which saw Wanderers score three times in 16 minutes.

Given twenty minutes and looked sharp. Excellent ball through to Williams to set up the final goal.

Brought on late to help secure the clean sheet with some fresh legs. 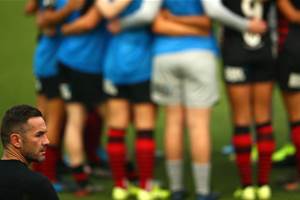 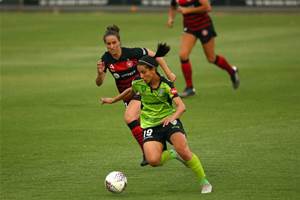 Wanderers move to top of the table after another stellar performance.
Multi page