The USWNT midfielder is set to join Canberra United for the W-League season | (Credit: All White Kit) 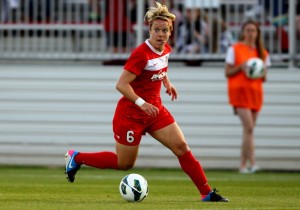 The USWNT midfielder is set to join Canberra United for the W-League season | (Credit: All White Kit)

33 year old Lindsey, who was on the radar for several W-League teams, has agreed to terms and been offered a contract by the capital side.

Capped 31 times for the USWNT, Lindsey's addition to the United squad is an important step in the 2011/12 Champions returning to the finals, especially in light of questions still surrounding the return, and match fitness, of 2011/12 Julie Dolan Medallist Sally Shipard.

In the mould of Shipard, Lindsey possesses a high work rate, excellent control, vision in the midfield and the ability to play a goal producing final ball, as well as score one or two of her own.

Crucially, her experience in the US and internationally would allow Caitlin Munoz to move further up the pitch and form a solid strike partnership with Michelle Heyman.

Add to that her leadership skills, particularly with the sizable contingent of United youngsters, and Lindsey could prove a pivot anchor for United.

“We are absolutely delighted to welcome a player of Lori’s quality to Canberra United,” said CEO Heather Reid.

“Her qualities are well known and her experience will be a huge bonus to the Canberra squad as they prepare for Season Six of the Westfield W-League."

"I am sure that Lori will be a big hit with the supporters and look forward to welcoming her into the Canberra United squad.”

TWG has also learned that Lindsey will be joined by a Washington Spirit teammate and a third American to complete Canberra United's international spots.

Canberra United commence their season on 9 November with a match against 2012/13 premiers Brisbane Roar.