All three players are products of the Capital Football Academy overseen by head coach Rae Dower and are the latest to be touted to make the transition to the W-League.

“I've been really privileged to help guide these youngsters in their football journeys over the past three years and I can't wait for them to show off their precocious talents this season. All three have already represented their country at international level."

"There are another half dozen or so players that will take the step up alongside these players in the coming years and it's hugely exciting to see that the future of women's football and Canberra United is in really safe hands.”

Roestbakken and Hughes have earned selection with the Junior Matildas (U17) while Hunt was a part of the Young Matildas (U20) recent AFF Women's Championship campaign.

“I'm very excited to be signing with Canberra United this season,” said Hughes. “It's been a long term goal of mine to one day play for Canberra United as I attended matches in Canberra when I was young. It's an honour to play and train with such talented and experienced players where I can learn from. This is truly a dream come true for me.”

“It is amazing to see this dream turn into a reality,” Roestbakken revealed.  “This is such a great learning curve in which I can gain lots of experience from quality footballers and coaches. Not only do I get to play with such talent, but I also get to learn and develop as a player. I am truly grateful and excited for this opportunity and I can't wait for the W-League season to start.”

“I'm extremely excited and thankful for this opportunity to play with and against some of the best female footballers in the nation,” Hunt echoed. “I can't wait to kick start the season with Canberra United.”

The Capital Football Academy pathway has proved fruitful for Canberra United in recent seasons with the likes of championship winners Julia De Angelis and Grace Maher successfully contributing in the W-League. 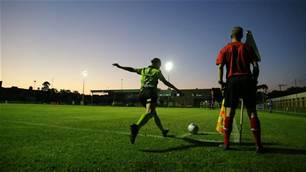 From Canberra to Iceland: The 'highlights video' that secured Hughes' 'dream' move