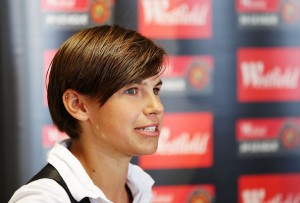 Hingst, who played for the Newcastle Jets in Season Five of the W-League, is the first major new signing for the defending champions for the 2012/13 W-League season.

“I am really happy about signing with Canberra United and playing yet another season in the Westfield W-League with one of the best teams,” said Hingst from Germany.

“It's always a great challenge to be the one to be scouted and I can't wait to bring in all my skills and experience to help win the title."

"I already have great impressions about the professional work in Canberra and after being in contact with Head Coach Jitka Klimkova about pre-season training, I can't wait to finally meet the team at the end of September and get the ball rolling again.”

A decorated international footballer, Hingst returns to the W-League for her second season after making 10 appearances for the Newcastle Jets.  With 174 caps to her name, including two World Cups and four European championships, the central defender will be an important part of a Canberra defence sans Lydia Williams.

“To be able to add such a decorated and capable player to our ranks will bolster our already strong line-up and we look forward to seeing Ariane in green for 2012/13.”

“Ari is no stranger to Canberra having first played here in the opening Olympic Games event in September 2000  when she helped Germany beat Australia 3-0 at Canberra Stadium."

"When I met with her to discuss terms for the W-League she complained about the cold weather at that time in the national capital. I’ve assured her it will be hot in summer so let’s hope we at least deliver on some fine weather for her and quality football”.

United expects to re-sign many of the players who were integral to the 2011/12 championship winning and undefeated season.  Their full squad is due to be announced in late September.