Brisbane Roar will be aiming to bounce back from an embarrassing 8-2 A-League Women defeat when they take on a rejuvenated Canberra in Brisbane.

Canberra broke through for their first win of the A-League Women season with a 5-0 demolition of Western Sydney on Tuesday.

The result snapped a nine-match winless run, and has given Canberra a huge dose of confidence heading into Friday's clash with Brisbane Roar at Perry Park.

The three-day turnaround leading up to Friday's match, plus the bruising nature of their win over the Wanderers, means Canberra's players face a challenge to be firing on all cylinders against Brisbane.

But Maher said the breakthrough win had given the team a massive boost.

"I don't think I've had so many bruises in a game ... but the win makes the sore spots a little bit sweeter," Maher said.

"It was a big sense of relief for the team to get the first win of the season. It's been eating away at us.

"Before the game we all noticed this sense of calm between the players. We weren't sure how that was going to translate on the field.

"And then lo and behold you could tell in the first 15, 20 minutes, everyone was taking their time, finding the players, keeping the ball and it put the Wanderers on the back foot."

Brisbane enter Friday's match on the back of an embarrassing 8-2 thrashing at the hands of Adelaide last Sunday.

Maher is expecting a tough challenge from a Roar outfit desperate to make amends.

"We know they're quality," Maher said.

"We had a thrilling 3-3 draw with them at home earlier this season.

"Katrina Gorry, we know she can pull anything out of the bag at any given moment.

"We're certainly not getting carried away with our result, because we know different opposition pose different threats." 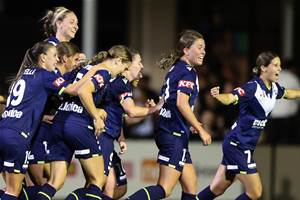