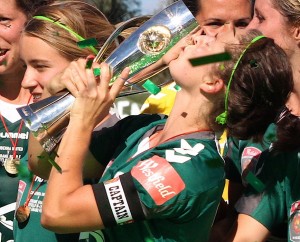 Defending W-League champions Canberra United have announced their full squad for their 2012/13 season title defence.  The squad sees the retention of 14 championship players with the additions compromising of a mix of local, interstate and international talent.

“I’m very happy with the compilation of our squad for the new season,” said Head Coach Jitka Klimkova.

“It was very difficult to select the final squad but the five youngsters who I have added to the mix have lots of talent, pace and motivation and will be a terrific addition to the group.”

As they have since inception, Canberra have once again managed to retain their core spine players including two time Golden Boot winner Michelle Heyman up front, current Julie Dolan Medallist Sally Shipard anchoring the midfield and defensive marshal Ellie Brush returning for her fifth season as United captain.

“Of the twenty player squad we have only one international player and five from interstate [Hayley Raso and Arnold from Queensland, Cooper, Burke and Heyman from NSW],” stated CEO Heather Reid confirmed.

“The other fifteen players are all locally based showcasing the depth of talent that is available in the ACT and surrounding region. The inclusion of the young players in the final twenty will certainly help the development of the game in the Canberra region and we are confident that they have the skills, talent and capacity to thrive at the highest level.”

Canberra United kick off their title defence on Saturday 20 October with a grand final re-match against the Brisbane Roar.