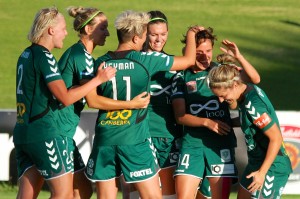 Canberra United overcame a pre-match injury scare and a gallant Perth Glory to record a 2-0 win in the Westfield W-League at Percy Doyle Reserve on Saturday night.

United captain Nicole Sykes cut her hand on a fan in the changerooms before the match, forcing the kickoff to be delayed by several minutes.

But Sykes made a quick recovery and played a key role in her team's fourth victory from five matches this season.

A depleted Perth - missing key players Collette McCallum (knee), Kate Gill (illness) and Sasha Andrews (ankle) - did well to keep level with Canberra in the first half, but Canberra scored twice through Ashleigh Sykes and Stephanie Ochs in the second half to claim the three points.

Canberra dominated possession in the first half, but a defensive-minded Perth was able to restrict the number of serious attempts on goal.

The first serious threat from Canberra came in the 20th minute when Grace Gill's free kick from near the left corner flag was deflected by a team-mate across the face of goal.

Ochs forced Glory goalkeeper Chantel Jones to make a jumping overhead save in the 25th minute before again troubling the home side with a potentially lethal cross only minutes later.

Kendall Fletcher looked to have opened the scoring for Canberra in the 29th minute with a low, hard shot that had Jones well beaten, but it ricocheted off the right post and out for a goal kick.

United midfielder Lori Lindsey caught out the Glory's defence with a surprise shot on goal from outside the box, but Jones was awake to the attempt and knocked it over the crossbar with her outstretched right hand.

It took Canberra just six minutes after the half-time break to find the goal they had been searching for when Ashleigh Sykes slammed the ball into the back of the net after team-mate Ellie Brush headed the preceding corner into the post.

Michelle Heyman almost added a second - and her fifth of the season - in the 60th minute, but her attempted lob over Jones hit the upright near the top left corner.

Heyman was also denied another chance moments later by a desperate Thia Eastman, who performed admirably in her starting debut.

Rising American forward Ochs iced the win with an injury-time strike that took her personal tally for the season to four.