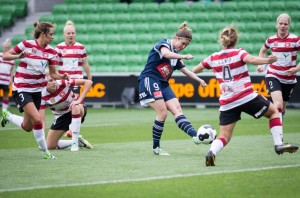 Friend, who is currently second on the Golden Boot table with seven goals, joins fellow Victory teammate Katie Hoyle for the 2014 season.

“A few of my team mates here in Melbourne have played in England and they’ve spoken about the high standard of football," said Friend on the Notts County statement.

"I just want to play football at a high standard all year round and I’ve only heard great things about the Super League.”

"It sounds like one of the most organised and professional structures out there.”

Friend becomes the latest Melbourne Victory member to announce a move to the UK with coach Dave Edmondson last week revealed as the new coach for Bristol Academy.

“She’s a great talent, and at such a young age, Caitlin is an exciting prospect and under full time training here at Notts she will thrive and only get even better,” said Nott County manager Rick Passmoor.

“Caitlin has been scoring goals for fun in the W-League, which is a great standard, so we’re hoping she can come over here and continue that scoring form!”