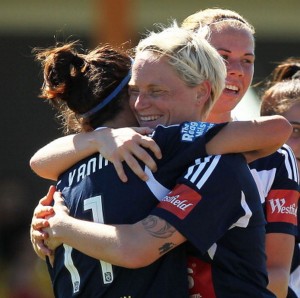 A Caitlin Friend hat-trick has propelled Melbourne Victory to a 6-0 thrashing of the struggling Newcastle Jets in the Westfield W-League at Kingston Heath Reserve on Saturday.

It was a dominant win for the Victory, their biggest ever in the W-League, with Friend an ever-present threat while being supported by Enza Barilla's brace and Gulcan Koca's effort from the edge of the area.

The Jets started well early but were reduced to fleeting chances on the counterattack as the hosts stamped their authority on the game with Jess Fishlock, Steph Catley and Lisa De Vanna wreaking havoc on the ball.

Newcastle's best chance of the game occurred just before the Victory opened the scoring with keeper Cassie Dimovski just smothering Rhali Dobson's cross before it could reach Adriana Jones.

Friend's opener on 31 minutes was fortunate as Jets defender Hannah Brewer cleared the ball straight into the Victory striker's body and the ball nestled in the back of the net.

Three minutes later, Koca doubled the lead after placing a shot in the left corner when teed up by De Vanna.

The game was effectively ended as a contest just before half-time as Fishlock and De Vanna linked up to release Friend, who scored her second into an empty net after toeing the ball underneath Jets goalkeeper Eliza Campbell.

Catley, who continually got forward from her left-back position, was dynamic in the second half with her run and cross in the 52nd minute eventually finding its way into the goal through Barilla's tap in.

Things went from bad to worse for the Jets as keeper Campbell was replaced by Ainsley Buchanan after landing awkwardly during a set-piece.

While De Vanna did not get on the scoresheet, her movement was exceptional throughout the game and when released down the left wing on 68 minutes, her pinpoint cross was side-footed in by Friend to seal her hat-trick.

Seconds after Friend's strike, Barilla secured her brace after bundling home another Catley cross at the back post.

The Victory's triumph was soured by a knee injury suffered by Ashley Brown.