Matildas attacking midfielder Caitlin Foord has been named the 2016 AFC Women’s Player of the Year.

Matildas attacking midfielder Caitlin Foord has been named the 2016 AFC Women’s Player of the Year.

.@CaitlinFoord caps off a stellar year with top prize in Asia. pic.twitter.com/wpXp3JVi3v

“I would like to start of by congratulating Lisa and Tan also on an amazing year,” said Foord on being named the best player in Asia.

“I wasn't really expecting this to be honest.”

Thankyou so much for all the kind words & congratulation msgs. I'll take this trophy back to Aus on behalf of all my @TheMatildas teammates???? pic.twitter.com/94AbZEXd9d

Foord's 2016 has seen her overcome injury to be one of the key players for the Matildas during their AFC Women's Olympics preparation and campaign.

Congratulations to @CaitlinFoord! Honour to see her grow as a player. Great to see the legacy of @TheMatildas grow with her. pic.twitter.com/8ytNPbq9Mi

“I would like to thank the FFA, Staj [Alen Stajcic], the rest of my Matildas teammates.  Me winning this trophy reflects on obviously an amazing year us Matildas have had. I'm taking this on behalf of all of them”

“Lastly, I would like to thank my Mum and my sister for all their support. I wouldn't be here without them.”

The Sydney FC forward becomes just the third Australian to claim the prize and the second in three years as she joins Kate Gill (2010) and Katrina Gorry (2014).

In the other awards, Australian officiating duo Kate Jacewicz and Renae Coghill were recognised alongside India’s Uvena Fernandes for the AFC Referees Special Award 2016.

The trio were the AFC team to officiate the final of the 2016 FIFA U17 Women's World Cup with Jacewicz the first Australian since Tammy Ogston on 2007 to wield the whistle in the final of a FIFA tournament.

“Renae and Uvena are consummate professionals. During training and preparation, they have always given 100% and they are extremely committed to ensuring that we work well as a unit," she said.

“My ultimate aim is to officiate at the FIFA Women’s World Cup 2019 in France."

"In the meantime, I am taking it one step at a time and will continue studying our elite referees and AFC instructors." 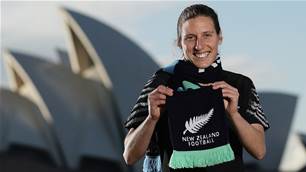