Perth Glory's squad received a further boost with Caitlin Foord confirming her return to the premiers for Season 8.

Perth Glory's squad received a further boost with Caitlin Foord confirming her return to the premiers for Season 8.

“After the amazing season and the time I had with the club last year, it was hard to not want to come back,” said Foord.

“I’m really looking forward to trying to go one step further than we did last year, and that would be winning the championship with the club.”

Although a national team defender, the versatile Foord played a key role in Perth's attack, scoring a season's best 5 goals in her first season with the Glory.

For the recent FIFA Women's World Cup, Foord returned to her right full back position starting for the Matildas in all five matches with impressive form against the world's best attackers.

It is that versatility that Bobby Despotovski has coveted and made securing her signature a priority.

This was an easy decision to make,” Despotovski said.

"She is an extremely valuable member of the team and last season, she was exceptional on the wing.”

“She brings the whole lot to the club, she’s played for the national team in the World Cup and brings direction, leadership, and skills that will separate Glory from losing games and winning games this year.”

Like Kerr, Foord is looking to help the reigning premiers go one step further this season after being defeated 3-1 by Canberra United in the championship match.

“We fell short last year by going down in the grand final. Obviously we want to get there first, but it would be amazing to win the championship with this club and this group of girls.”

The retention of Kerr and Foord will be key for the Glory in attracting and keeping several team members who have had interest from interstate clubs.

Foord is currently playing club football alongside Kerr at Sky Blue FC in the American NWSL.

The W-League kicks off it's eighth season on 17 October. 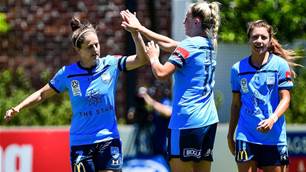