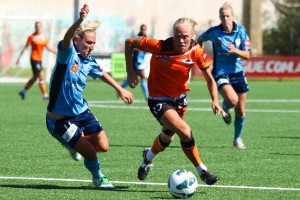 The exodus has begun.  With the conclusion of the W-League and the closing of transfer windows, announcements of W-League players heading abroad have commenced.

First was the news that Sydney FC forward Sam Kerr had been snapped up by Western New York Flash in the newly formed North American National Women's Soccer League (NWSL).

Kerr's representatives have subsequently hosed down the signing talk, however our sources and several reputable women's football sites have been reporting the signing.  If confirmed by the club, Kerr will be playing in a team consisting of current FIFA World Player of the Year Abby Wambach and US Olympics hero Carly Lloyd.

Meanwhile one signing that has been confirmed by a club is the move of Brisbane Roar attacking midfielder Tameka Butt to German powerhouse club 1 FFC Frankfurt.  The one time home of German great Birgit Prinz, Frankfurt is a colossus of women's football having won the UEFA Women's Champions League three times and were last year runners up in that same tournament.

"Tameka is for us a young player with huge prospects," said FFC Coach Philipp Dahm on the signing of Butt.

"She has collected in her younger years experience in different leagues. Tameka is one of the most promising young talents in Australian football. We are very pleased that it has added to our squad and found their way to Frankfurt."

While Butt herself is excited to play alongside some Germany's and the world's best including Simone Laudehr, Japanese defender Saki Kumagai and touted future star Dzsenifer Marozsán.

""I feel very honored that I now have the chance," said Butt on Frankfurt's website.

"I want to thank my former club Brisbane for the great support. Now I am looking forward to my arrival in Frankfurt in the next few days and of course the fact that my new team-mates, the club managers, club partners and fans of the 1 FFC Frankfurt meet.

"It excites me greatly to follow along with my future colleagues the goals of the association."

While several other moves for W-League players are in the works (stay tuned to us!), any in the Young Matildas equation may not get a chance to move.  It's a big year for Australia's U20 team with World Cup qualification up for grabs later this year.  With new coach Spencer Prior set to have several camps, as well as the tournament itself in October, a professional stint overseas looks like an unlikely option.

Pending league approval, Perth Glory striker Lisa De Vanna has signed for NWSL side Sky Blue FC (first reported on Equaliser Soccer).  De Vanna, who previously played for Washington Freedom in the WPS, is no stranger to US women's football and will meet up with former Freedom coach Jim Gabarra.

The 28 year old will have an inside scoop on Sky Blue with Perth Glory and national teammate Collette McCallum a championship player for the New Jersey outfit.

With the collapse of WPS, De Vanna spent the last season playing for Swedish side Linkopings.