Western Bulldogs coach Paul Groves has plenty to be excited about this weekend.

His team of reigning premiers will return to their home fortress, Whitten Oval, where under lights and a brand new scoreboard, the Doggies will unfurl the 2018 AFLW flag; just the third senior premiership for the club and first for the women’s side. He’s rightfully looking forward to the moment.

“I’m on record as saying that’s why we play footy… why we coach footy. We’ll unfurl it, we’ll fire the new scoreboard up – not sure there’ll be any power left around Footscray – it’s just going to be an amazing venue going forward for women’s footy," Groves said

“[We’ll] welcome Aasta [O’Connor] back who’s now at Geelong. It’ll be great to have her here, just for that little bit of a [joint] celebration, then we’ll go to battle with her.”

The new scoreboard at VU Whitten Oval is up, firing & looking 👌 pic.twitter.com/JH2i0CgmEp

After accounting for 2017 winners Adelaide by just a point at Norwood last week, the Bulldogs have a prime opportunity to climb to a top-two spot in Conference A, paramount to any potential premiership defence.

If they are to do so, key to their fortunes this year will be superstar spearhead Katie Brennan. Groves revealed that Brennan – who controversially missed the grand final last year due to suspension – didn’t have the pre-game buildup her ice-cold goal kicking would have suggested.

“She was particularly nervous, she mentioned to me it’s probably the most nervous she’s ever been before a game of footy," he said.

“Off the back of an ankle injury, not having played and going back to Adelaide...she kicked a couple and contributed massively to the result.

“I’m just really excited by where she’s at both physically and mentally. Can’t wait to see her influencing games very strongly, very soon.”

They will now face league newcomers Geelong, a side packed full of young talent and fresh off an inspirational win over an improved Collingwood outfit. Groves will certainly not be taking them lightly.

“Gee they were impressive, down at Kardinia Park.

“Phoebe [McWilliams] and Mel [Hickey] probably coming back in will give them a bit of a kick along...and maybe Georgia Clarke.

“They’ve got talent across the park: Olivia Purcell, Nina Morrison, Becky Webster, Denby Taylor, the top end of young players, we’ve seen the influence they can have on a game.” 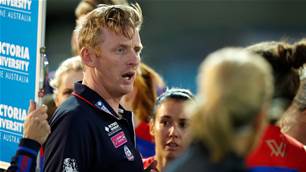