Could this be the turning point for Adelaide United? | Credit: Getty Images 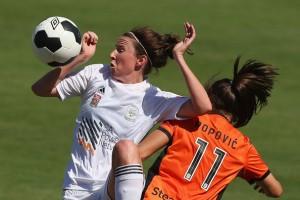 Could this be the turning point for Adelaide United? | Credit: Getty Images

Adelaide United caused arguably the biggest upset in the W-League's short history with a 1-0 win over Premiers Brisbane Roar on their home turf.

The Brisbane crowd had only just begun to settle when the referee fervently blew her whistle to signal a spot kick for the visitors with many missing the entire incident.

It was a decision that was to have later ramifications as it not only earnt Adelaide a shot at Nadine Angerer's goal, but also gave a bewildered Laura Alleway her marching orders.

Although the spot kick was not converted, for the rest of the first half Adelaide worked to capitalise on the extra player available to them and attacked with some very strong and physical football.

Roar coach Belinda Wilson marshalled her troops into a new formation moving to three across the back, with a high line, and the experienced Angerer sweeping.

For the most part the defence held their own but Kristy Moore and Jayah Brown made pacy runs down the vulnerable Brisbane flanks to get in behind the Roar backline forcing Ballon D'or finalist Angerer to charge and smother.

There was some long ball football from the Adelaide side, which is arguably not a modern style of football, but the clever choice with the Roar's high defensive line. The reward was that Moore more than a few times found herself one on one with Angerer.

Melissa Barbieri was characteristically vocal for her  inexperienced Adelaide side. She kept her defence compact and hastened them to clear any dangerous balls in the attacking third to break down any fast momentum from the Roar's offense.

Alex Gummer, Jenna McCormack, Jessie Wharepouri and Snez Veljanovska were excellent in shutting down the Roar speed brigade and limiting the time on the ball that the Brisbane strikers Hayley Raso and Amy Chapman are routinely used to.

Further up the park they marked their opponents well and the tenacious Lisa Marie Woods worked hard to to cut off any feeds from the Roar midfield in behind United's back line.  Woods also did a remarkable job of continually putting her body on the line to muscle off an advancing Katrina Gorry or Larissa Crummer.

Simple football, but effective against an experienced side like Brisbane, one used to obtaining possession in the opposition's 18 yard box and repossessing quickly from sides who choose to play out from their defence.

For all of Adelaide's good work and their player disadvantage, Brisbane will feel like these were points lost.

The stats were in their favour.  Brisbane had 19 shots on goal as opposed to Adelaide's 9 shots on goal, they had more corners, dominated possession and spent what felt like most of the second half in Adelaide's part of the field.

Clare Polkinghorne, in returning to her defensive role was once again fantastic and her 50th minute strike was probably the highlight of the 19 shots had by Brisbane, only for her to see it crack the top of the crossbar.

Defensively Brisbane did a good job in keeping the Adelaide strikers wide and provided able assistance in the forward campaign.

Angerer showed why she's one of the world's best goalkeepers with consistent sprints forward to cut down angles of ensuing attackers and more often than not, ending up with the ball cradled in her own hands.

As expected the midfield were overrun but Elise Kellond-Knight, Gorry and co battled on against Adelaide's greatest strength.

Some very technical football took shape in the second half for the Brisbane team but many crosses in were not timed well and far posts were left empty.

In the end numbers won out as they were hit on the counter with a shock goal against the run of play by substitute Daniela Di Bartolo in the 71st minute.

With a steep learning curve ahead of them, Adelaide under the guidance of coach Ross Aloisi, has proven to the rest of the league that they are willing to climb!

Brisbane will have to regroup after this disappointing result but should take comfort in knowing that they're brand of football can win big games, but overall their adaptability needs improvement when playing unpredictable teams with mostly unknown players.

It doesn't get easier for them at home. Their next match? Sydney FC