Born in England, Frederick-Traub moved to Pinjarra, Western Australia as a seven-year-old and when she got to school everyone was playing Aussie Rules during lunchtime.

"I actually didn't know what AFL was, I thought it was rugby," she said.

"I just really wanted to be part of that,"

Meanwhile, Bates started in the U11's and her best memory was taking the ball before she was cleaned up by a girl twice her size.

"My mum was watching the game and she wasn't sure if I should play football," she said.

The AFLW heads into its third season in 2019 and for the players, it's still a dream come true to be recognised for playing the sport they love.

"When I started playing footy it was to be part of something but to do it now, being at the top level, even now I still get a bit emotional talking about it," Frederick-Traub said. 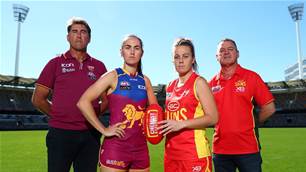 Gabba a go for Lions