American midfielder Celeste Boureille has taken out the Player of the Year Award following her first season in Orange.

After being named Julie Dolan medallist for the second time with Sam Kerr, captain Clare Polkinghorne was voted by her teammates as Players' Player of the Year after leading our ladies to a record-equalling third premiership.

Striker Allira Toby took the Golden Boot with five goals while Abbey Lloyd was named as Breakthrough Player of the Year.

“It was a wonderful season and I’m proud of the pride, passion and dedication all our Roar Women players and staff have shown,” she said.

“It is an honour to be part of such a successful football club and we can’t wait for season 2018/19.” 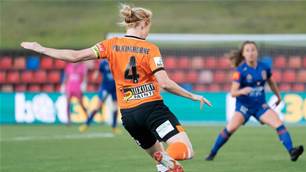