Western Bulldogs vice-captain Ellie Blackburn is loving balancing her football with the fight against youth homelessness.

Blackburn is set for the biggest game of her career in this Saturday afternoon as they lock horns with Brisbane Lions at Princes Park.

The 23-year-old has played in all games this season for the Bulldogs, however is unsure what she will do with her footy during the off-season.

The organisation is partners with the AFL and have a number of footballers who are ambassadors.

And the Bulldogs midfielder said she was finding the experience rewarding.

“I sat down and thought about which different things I want to do in life and how I want to have an impact on people’s lives,” Blackburn told The Women’s Game.

“I worked in retail previously, so I just wanted a different environment. It’s something I really enjoy being a part of and being able to influence lives for the better.

“Ladder have been a great supporter of the AFL and Western Bulldogs. The opportunity popped up for me and I’ve really embraced it. I just wanted to be involved in something different and it’s a great career path to be a part of.

“They’ve given me a great opportunity to work in this environment and absolutely loving being able to do it and have an impact on people’s lives for the better. It influences my life a little better as well and I get a lot of joy and pleasure out of it too.

“Our club also does great things, the Sons of the West and Daughters of the West programs have been put into place. The Footscray community really embraces the football club and we’re the heart and soul of this community. We love it and love being able to embrace the community as much as we can.”

It is likely Blackburn will captain the Dogs on Saturday after news broke today skipper Katie Brennan will be rubbed out after her tackle on Melbourne’s Harriet Cordner last week.

The Dogs sealed their place in the big dance with a thrilling two-point win over the Dees, however Brennan was facing a nervous wait over the weekend. 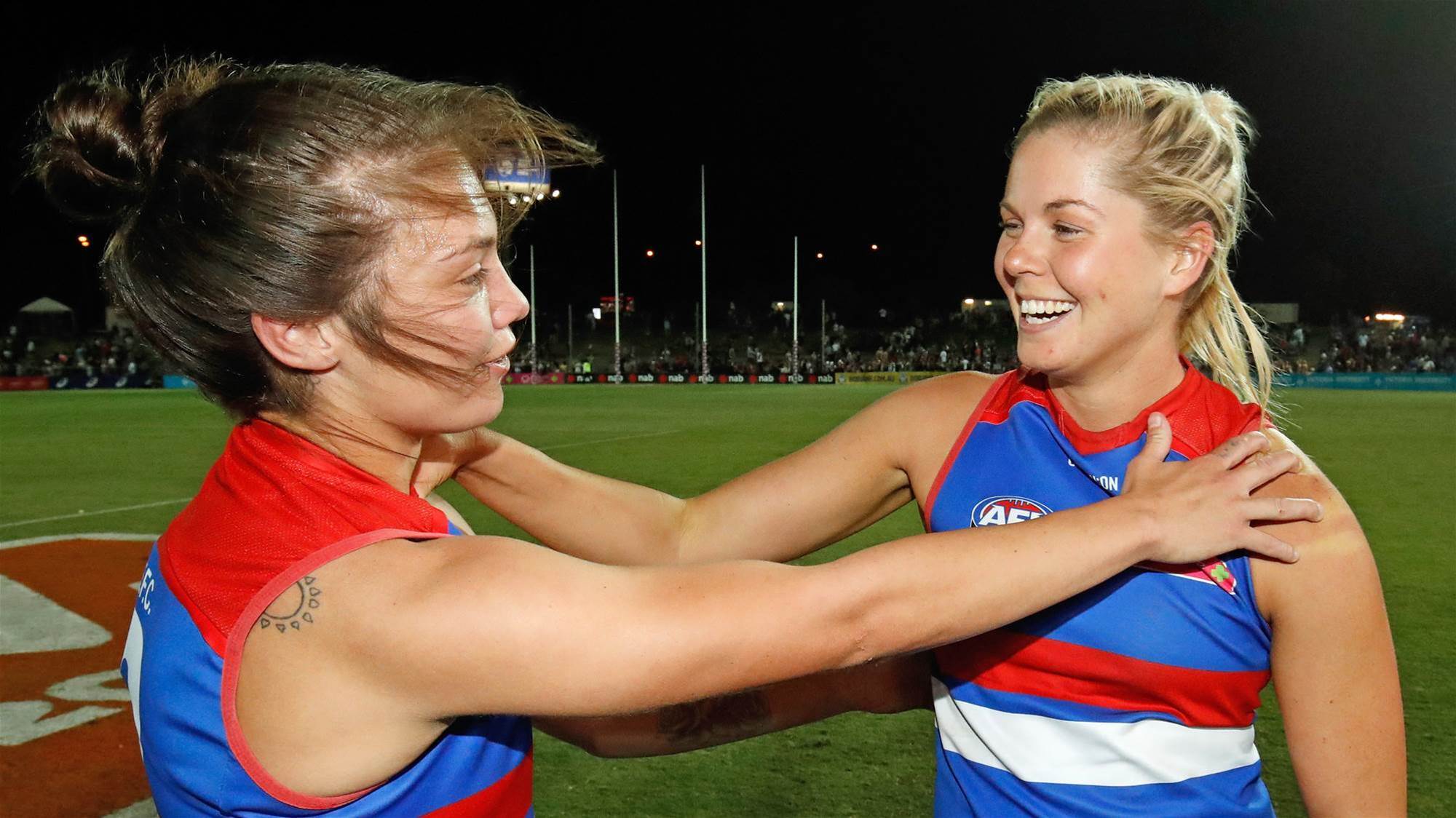 Blackburn celebrates with Brennan after their win over Melbourne

The club will challenge Brennan’s suspension, however Blackburn was confident they could get the job done nonetheless.

“Either way, we’re really confident Katie will be able to play this weekend and we’re going to prepare ourselves as if she will,” she said after the news broke.

“If she doesn’t, we’re confident because we’ve managed to play three games without her this year and had a good run with that.

“Whoever steps up for the opportunity will make the most of it and will fit into that role perfectly. We’ll just embrace it and play good footy.”

Bulldogs’ opponents will be looking to be second-time-lucky after topping the ladder last year and falling at the final hurdle to Adelaide Crows.

Blackburn admitted there were some nerves, but was bold with her message to the enemy.

“We’re probably more focused about what we can do and hopefully make it 0-2 for them in the Grand Final losses as well,” Blackburn said.

“In their preparation, I’m sure they’re feeling as nervous as we are.

“We probably haven’t based our success off our winning and losing streaks. It’s been based off how we felt as a group that we performed and we’ve got goals that we tick off each week.

“If we can achieve that then we deem it as a successful week. We’ve had a pretty good year so far and we’re pretty pleased with what we’ve been able to achieve.

“We’re not completely satisfied just yet, we’ve got one more thing to do.”