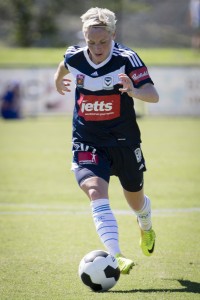 Melbourne Victory notched up their third win of the season at the Kingston Heath Soccer Complex on Saturday, with an emphatic 6-0 win against the Newcastle Jets.

The result gave Melbourne their best ever win and a share of top spot on the W-League ladder. In what was a brilliant result on paper, for most players and supporters it’s a hollow victory following the devastating injury to Ash Brown in the final moments of the match.

Newcastle fans could be forgiven for thinking their team was completely annihilated. Whilst that is somewhat true, the Jets were clearly on top in the early moments of the match and their commitment couldn't be challenged as they fought hard for the ball in every contest.

Victory doesn’t have a consistent home ground this season and this was the first time playing at Kingston Heath. It is a little bit out of town and not an easy venue to get to on public transport if you’re so inclined, but the ground condition was almost faultless and the crowd seemed to be on the large side which is all good news for the W-League.

Victory sponsors, Jetts Fitness, also made the trip and were on hand to liven up the atmosphere. It’s good to see such strong support for the team.

Victory won this match through a combination of taking their time and structured football; things they clearly lacked in their first round match against Sydney FC. Victory’s fitness was unequaled by the Jets and their commitment and second efforts invariably helped them win the ball and another chance to attack again.

Big players in the match, well you can’t go past the work rate of Jess Fishlock who gives the impression that there’s more than one of her.

Fishlock is not the only player who can make you feel that way. Enza Barilla is rarely heralded for the impact she has on a game, but her work rate is tireless and scoring a brace is not too shabby either. Caitlin Friend continues to impress with a hat trick and is really causing trouble for the opposition with her insightful and intelligent positioning.

Melbourne still have room for improvement.

Their first 10 minutes were unspectacular and the better teams will make them pay if they don’t get their act together early. A little more patience is called for at times but overall this was a great team effort.

Captain Gema Simon played well for the Jets, with some good form from Rhali Dobson and Hannah Brewer as well.

Newcastle were unable to shut down Melbourne’s key players whilst Victory were able to effectively shut down Newcastle’s midfield and strikers. With very few opportunities, the Jets never really looked like scoring.

Was there any way Newcastle could have changed the game around? Sadly, the Jets really don’t have the game at the moment to take it to the top teams for the whole 90 minutes. There are definitely quality players in their squad but there’s either not enough fitness to sustain it for the full match or not enough belief.

A touching highlight of the match was the giant cheer for Ash Brown when she took to the field. Returning from an ACL injury, Brown was visibly calm and focused, not letting emotion get to her. She immediately made her presence known, getting involved in the action looking fit and full of purpose.

Disastrously, in the final moments of the match, Brown appeared to injure herself again, going down and needing to be stretchered from the field at the conclusion of the match.  She later confirmed the news that was feared on the ground.

Thanks for everyone's amazing messages of support. Really appreciate it, however unfortunately it is the acl again :( #roundtwo

There was such a feeling of shock throughout the crowd, the team and the media that the rest is just a blur and the win wasn’t celebrated. Goalscorer Gulcan Koca summed the sentiment up on twitter.

Would do anything for the game to have ended differently today. Was a big loss rather than a win for me today. @AshleyBrown412 we love you.

Our best wishes go out to Ash and the Victory team.