Australia's women's sevens team have had a bittersweet ending to the 2017–18 World Rugby Sevens Series.

Australia secured the Championship but lost the Paris Cup Final after going down 33-7 to Trans-Tasman rivals New Zealand.

“It was a tough game for the Final, we were at the end of a really long stretch with a couple more injuries overnight but certainly the girls recognise the World Series win and really well deserved given the tough year that it’s been and the competition we’ve got around us," Head Coach John Manenti said.

“We finished no less than third in any tournament, I’m very proud of the whole group and how hard they’ve worked to get where we did and get the job done last night,” he added.

The Black Ferns were dominant from the whistle as Michaela Blyde, who scored the winning try against Australia at the Commonwealth Games, went over.

Australia had the chance to get a try back after Tyla Nathan-Wong was yellow carded but they were also reduced to six and just seconds later, Black Ferns captain Sarah Goss sliced through the Australian defence to score.

It didn't get any better for the Aussies as leading try scorer, Portia Woodman added to the tally.

Heading into halftime, New Zealand took a 26-0 lead before the game resumed and a slick break from Charlotte Caslick put  Evania Pelite over.

However, Woodman nabbed her second of the game and seventh of the weekend to give New Zealand the win.

“We got so much experience out of that game, we had some girls out there and get something that you don’t get from sitting on the bench so that’ll be invaluable moving forward for our squad," Co-Captain Charlotte Caslick said.

The team will head back to Australia to continue preparations for the Sevens Rugby World Cup which kicks off next month. 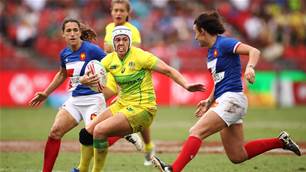