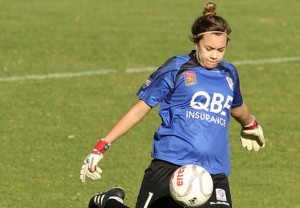 Canberra United have today announced that Young Matildas goalkeeper Mackenzie Arnold and the up and coming Trudy Burke have started training with the reigning champions as they look to settle on their goalkeeping ranks for the fast approaching 2012/13  Westfield W-League.

Canberra's goalkeeping stocks took a hit when it was announced at the conclusion of last season that two time W-League Goalkeeper of the Year Lydia Williams would not be available due to scheduled wrist surgery in late 2012.

Subsequent to that announcement, Williams suffered an ACL tear during her time with Swedish side Pitea, well and truly ruling her out for a minimum of 12 months.

Canberra's search for a custodian has seen Arnold and Burke arrive in Canberra early for pre-season training with Matildas and Canberra United goalkeeping coach Paul Jones in the lead-up to their trials and the official start of training on 21st September.

Since the conclusion of the W-League, both Arnold, the Perth Glory 'keeper for Season Five, and Burke, who is the custodian for the  Illawarra Stingrays, have spent time training with the Matildas and will be looking to stake their claim on the vacant No. 1 jersey.

“We are happy that these two promising goalkeepers want to play for Canberra United and I’m happy that they have already moved to Canberra to commence training with Paul Jones,”  said United Head Coach Jitka Klimkova

“We are unfortunately without last year’s Westfield W-League goalkeeper and Player of the Year, Lydia Williams, who is not available due to injury and we are looking forward to developing the next generation of top goalkeepers, not just for Canberra but for the Australian national team.”

“Having two good up and coming goalkeepers gives us the position of being able to select on merit,” Klimkova continued. “Both Mackenzie and Trudy have the potential to be the number one and I have no doubt that they will support each other well during the season. “

Klimkova returns to Canberra in mid-September as United embark on becoming the first W-League side to claim back to back championships.

The Westfield W-League kicks off on Saturday 20 October with the traditional Grand Final rematch between Canberra United and runners up Brisbane Roar taking place at McKellar Park at 2.00pm.