Victoria Azarenka and Ashleigh Barty have lifted their first WTA doubles titles together after overcoming No. 8 seeds Anna-Lena Groenefeld and Demi Schuurs.

"There were ebbs and flows a little bit, a few momentum changes in the match," Barty said.

"But I think that the way we started the second set, in particular, we were able to keep the foot down, keep the momentum going through the tiebreaker as well."

The unseeded duo win their first title together with a win over Schuurs and Groenefeld--> https://t.co/kCvlltLhQb pic.twitter.com/LA3pZhk0O6

It's is the second consecutive double Rome title for Barty having won it with Schuurs last year.

However, on Sunday they became rivals with Barty and her partner Azarenka able to avenge a second-round loss to Groenefeld and Schuurs at last weeks Mutua Madrid Open.

The Australian/Belarussian duo got off to a hot start as they zoomed to a 3-0 lead, having broken after Groenefeld double faulted twice and fired a forehand error long on the deciding point.

But Barty double faulted on break point to cede the break back for 3-2, and the set turned.

This would allow Groenefeld/Schuurs to level the set before taking the lead at 4-3 and were able to close out the set two games later.

However, Azarenka/Barty were dominant in the second set with strong returns from the pair to break and lead 4-0. Groenefeld was unable to get her team on the board at 5-0, ending the set with back-to-back double faults.

The teams headed for the match tiebreak where Azarenka and Barty took complete command.

The duo will have next week off from doubles action, then will reconvene in Paris to go for a Grand Slam title at the French Open. 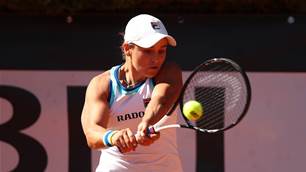 Barty and Azarenka through to Rome final

Digger out to do a Ben Curtis at Sandwich