The Matildas' coach announced the squad that will meet the World Champions at the end of this month.  The two match series should prove to be an exciting one for the Australians who last faced the Americans during the Tokyo Olympics Bronze Medal match.

Matildas Squad for the November matches

Full ticket details can be found using this link.

Both matches will once again take place in New South Wales.  The first match is going to be held at Stadium Australia in Sydney.  The Matildas will then move up the coast to Newcastle for their second encounter which is scheduled at the McDonald Jones Stadium.

Continuing with the same trends from his previous squad selections in 2021, Gustavsson has called up a team with a mixture of youth and experience.  In total twenty-five players will be brought into camp.

Twenty-one of those players were also present in the October selection which faced Brazil in Sydney.  Hayley Raso and Emily Gielnik are also returning to the team after having missed the last camp due to injury.

Elise Kellond-Knight and Chloe Logarzo are both absent after having had surgery in September. Emily Checker, Jamilla Rankin and Jada Whyman who are are included in the last camp were excluded from this one.

Two new Australians have also been called up for the first time, Sydney FC's Jessika Nash and Charlize Rule. They could become the two newest Matildas to get capped this year, with twelve other women having played their first senior match in 2021.

Introducing your 25-player squad for #AUSvUSA 💪

Get your tickets now: https://t.co/LxeDC0wQQK

Speaking of his choices for this last 2021 meeting Gustavsson stated:

“In selecting the squad, balance was at the heart of the decision making.

“We know that this is our final occasion to see the group together before announcing the squad for the AFC Women’s Asian Cup next year, and our focus remains on this crucial preparation.

“However, with another camp at home, we didn’t want to miss the chance to expose another two young players to our standards and team philosophy, and to find out whether they can be a part of the building of depth towards the FIFA Women’s World Cup in 2023.”

The two match series will be the final preparation this year ahead of the 2022 AFC Women's Asian Cup.

The November 2021 Matildas Squad is:

Optus Sport have retained the rights for both English top flight football leagues, the FA Women's Super League and the Premier League. 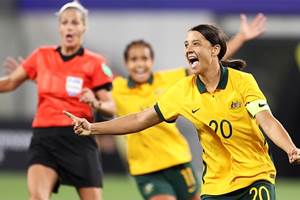