Matildas Head Coach Alen Stajcic has named his 23-player squad for the 2015 FIFA Women's World Cup to be held from 6 June to 5 July 2015.

Matildas Head Coach Alen Stajcic has named his 23-player squad for the 2015 FIFA Women's World Cup to be held from 6 June to 5 July 2015.

“We have selected a positive squad with players that have a strong belief that they can go into any game and win,” said Stajcic.

“Over the course of the last four months the composition of this final squad has changed every week, but as always I believe ‘players pick themselves’ and the 23 players that have been selected thoroughly deserve to be in this squad and I am confident they will represent their country with distinction.

“The emphasis since we came together in January has been on expressing our Australian culture and the things this country is renowned to bring to any sporting contest, things like positivity, backing yourself and really taking it up to the opposition.

“We want to pride ourselves on a lot of these attributes that Australian teams have had for a long time, so it is about having that focus in this team and a belief that on any given day against any opponent we can come out and win.

“Considering the other teams we have in our group, it brings this philosophy into even sharper focus.”

13 players, including 2014 AFC Asian Player of the Year Katrina Gorry, are set to make their World Cup debuts while Leena Khamis has overcome an ACL to make her second World Cup squad.

With a majority of the players involved in the extensive World Cup preparations, there are few surprises regarding the squad selection.

All three were involved in the qualifying Asian Cup campaign but in their stead defender Servet Uzunlar, midfielder Leena Khamis and goalkeepers Melissa Barbieri and Mackenzie Arnold have been selected.

For 35-year-old Barbieri it marks a spectacular return to the national team after a three year absence.

The former Matildas captain and 2014 W-League Goalkeeper of the Year is set to join elite company by representing Australia in a fourth World Cup. Only Matildas Hall of Famer Cheryl Salisbury has managed that feat.

Drawn in Group D alongside world no. 2 USA, world no. 5 Sweden and African champions Nigeria, Australia has a tough task but Stajcic is confident his 23 player squad will be up to the challenge.

“Going on from our philosophy and style of play, it’s a dynamic, mobile team that can attack and score goals,” said Stajcic.

“It is a team that has lots of variations in attack so I believe we can cause a threat to any team in the world, and the players that were picked were certainly picked with that in mind.

“Whether it’s keeping possession and playing out from the back and controlling the tempo, to the fire power we have up front, we are confident we have all of the pieces of the jigsaw puzzle that go into producing the mindset we need when we take the pitch.”

After a break this week, Stajcic's squad will arrive in Sydney later this week for a pre-tournament training camp which will see them take on Vietnam in a two match friendly series.

[More: Matildas to take on Vietnam in Farewell Match]

While the first of the matches on 19 May will be closed door, the second match on 21 May will be the public's opportunity to see the team in action as a send-off game.

The Matildas opening their World Cup campaign against the United States in Winnipeg on 9 June 2015 (kick off 9am AEST).

All 52 matches of the Women's World Cup, including all Matildas matches, will be live on SBS One and online.

The tournament commences on 6 June 2015. 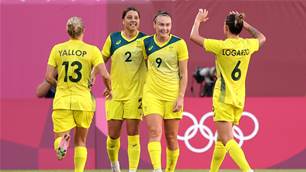