The second season of the US National Women’s Soccer League (NWSL) kicks off this weekend.

The second season of the US National Women’s Soccer League (NWSL) kicks off this weekend.

With all the matches streamed live on YouTube, the matches will be easily accessible for Australian women’s football supporters, which is great news considering the number of Australian and past and present W-League players set to be in action this season.

Here is our quick guide to the NWSL.

With a new coach at the helm, the Boston Breakers are looking to books a finals berth after missing out last season. 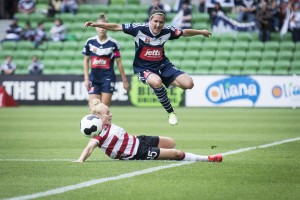 They will also be looking to their experienced senior players to lead the way including long time USWNT midfielder Heather O’Reilly, Canadian midfielder Kaylyn Kyle and Joanna Lohman.

Australian/W-League notes:  Matildas striker Lisa De Vanna made the move from Sky Blue FC to the Breakers in the off-season.

Since the Breakers traded USWNT striker and their 2013 leading goalscorer Sydney Leroux, De Vanna will be a crucial part of the Boston attack.

The Breakers have also been the home of Kyah Simon was the past two seasons but her ACL tear sees her out for the 2014 NWSL season.

USWNT player Kristie Mewis will also line up for Boston after she was traded to her home state from FC Kansas City. Mewis played a number of matches for Canberra United as a guest player towards the end of the 2012/13 W-League season.

Notable Players:  A slow start to the season put the Chicago Red Stars on the back foot and they never recovered.

Despite having a solid squad, the Red Stars struggled with consistency in 2013, evidenced by them defeating eventual Champions Portland one week before losing to wooden spooners Washington Spirit weeks later.

How Dames integrates these players with the existing squad led by one of the NWSL Players of the Year Lori Chalupny will go a long way to determining their 2014 fate.

Australian/W-League notes:  Canberra United premiership and championship defender Taryn Hemmings lines up for the Chicago Red Stars.  Hemmings is looking to return to starting line up after injured her knee in July 2013.

Julianne Sitch also spent some time in Australia lining up for current champions Melbourne Victory in the 2009 season. While the Victory didn't make the finals that season, it wasn't for Sitch's lack of effort with the midfielder taking out the Victory Player of the Year award.

Overview and Notable Players:  New to the NWSL, the Dash will be looking to make their mark early. 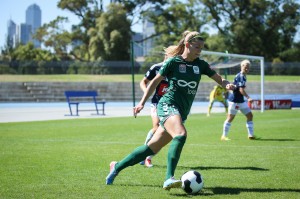 However with a majority of those players unavailable until later in the season, Houston will be depending on their less experienced players to hold the fort defensively.

Waldrum will also be hoping their midfield (which includes Becky Edwards and Nikki Washington) and attack (which includes Ella Massar, Keahlia Ohai and Stephanie Ochs) to click early in the season to relieve the pressure and gain points.

Australian/W-League notes:  Canberra United striker Stephanie Ochs is one of the players Randy Waldrum will be looking to for early season goals.

Coming off a strong W-League, in which she led Canberra to the premiership, the Dash will be hoping the 23 year old will take that same confidence into the NWSL.

Also on in the Dash squad is another former Canberra United player, midfielder Nikki Washington.  Washington is coming off an inconsistent season with Portland Thorns which ultimately saw her moved out.

For most of the season FC Kansas City were the NWSL front runners playing a possession based, fluid and exciting brand of football. 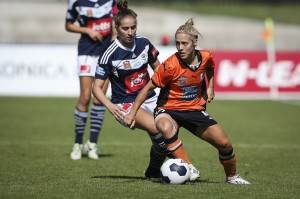 It was no surprise then that they scooped the NWSL awards with many of their key players recognised including attacking midfielder/forward Lauren Holiday (nee Cheney), captain Becky Sauerbrunn, goalkeeper Nicole Barnhart and midfielder Erika Tymrak.

Kansas City has one of the strongest and most balanced squads, which has been enhanced with the addition of USWNT defender Amy LePeilbet (if she can return to her best after injury) and former Bayern Munich forward Sarah Hagen.

Australian/W-League notes:  Considering their strong emphasis on possession football, it is no surprise that Matildas midfielder Katrina Gorry has been signed by FC Kansas City.

Gorry, who was nominated for the TWG Supporters Player of the Year, has been a key component of the Matildas for the last 12 months and will join up with the Blues after the Asian Cup campaign.

Overview and Notable Players:  With the star power provided in the allocations, from the start the Portland Thorns wore the tag of favourites.

At times throughout the season they seemed to be burdened by the expectation and the strong 10,000+ home field support.

Eventually the Thorns pulled it together when it mattered to take out the inaugural championship. 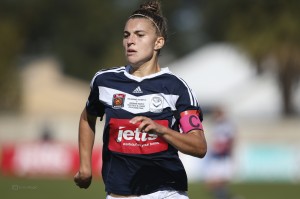 The end result is once again the Thorns will wear that favourites millstone around their neck.

Australian/W-League notes:  Another of the additions to the Thorns is Melbourne Victory captain Stephanie Catley with the 2x FFA U20 Player of the Year set to join the Champions at the conclusion of the Asian Cup.

Portland coach Riley has already indicated that Catley will play a crucial role in his plans as they look to play a highly attacking brand of football, which Catley is uniquely suited to.

It won’t be all new faces for the Championship captain with Catley seeing the familiar face of former Melbourne Victory forward Jessica McDonald who also joined the Thorns this season.Also familiar will the Brisbane Roar goalkeeper Nadine Angerer, whom Catley and Victory faced off against in the 2014 W-League Grand Final.

Overview and Notable Players:  After going winless for the first 11 rounds due to injuries and player unavailability, it would have been easy for the Seattle Reign to just throw in the 2013 season.

They didn’t and now coach Laura Harvey has something to build on with the influx of new players.  And boy has there been an influx. 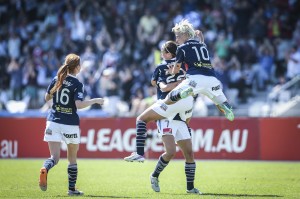 What Harvey had at her disposal later in the 2013 season was by no means shabby with USWNT goalkeeper Hope Solo, Keelin Winters, US defender Stephanie Cox, Reign Player of the Year and Wales captain Jess Fishlock and Megan Rapinoe forming a good base.

These players who have come in, however, put a whole new level of expectation on Seattle and it will be interesting to see how the former Arsenal Ladies coach makes it work.

Australian/W-League notes:  Fresh off a W-League championship, Melbourne Victory midfielder Jess Fishlock and defender Lauren Barnes will be hoping to experience more of that winning feeling with the Reign.

Fishlock and Barnes will have a familiar face playing alongside them instead of against them with Canberra United midfielder Kendall Fletcher newly acquired.  US midfielder Megan Rapinoe, who played a guest stint with Sydney FC, also adds to the W-League flavor of the Reign.

Overview and Notable Players:  Halfway through the season it was all blue skies for Sky Blue FC as they led the NWSL.

Then it all came crashing down at the back end of the season as injuries crushed any chance of a real Championship run. 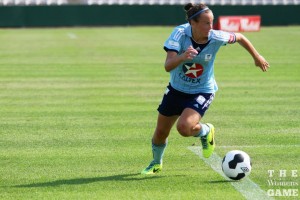 US goalkeeper Jill Loyden (who will battle with incumbent Brittany Cameron for the No.1), US defender Kelley O’Hara, Canadian Sophie Schmidt, Mexican forward Monica Ocampo provide plenty of experience and will once again be the backbone of the team.

While Sky Blue are strong defensively, the question will be where their goals will come from.  Canadian forward Jonelle Filigno, US U20 world cup winner Maya Hayes and Japanese striker Nanase Kiryu have been added but the trio are as yet untested in the NWSL.

Australian/W-League notes:  Sydney FC’s Caitlin Foord returns for a second season with the Sky Blue FC.  Foord could be a surprise answer to the goals question with the talented 19 year old re-founding her youth goalscoring touch with 5 goals for the Sydney in the 2013/14 W-League season.

Foord’s spot down back could be taken up by newly acquired defender Camille Levin who spent parts of the 2013/14 W-League season with the Western Sydney Wanderers.

Goalkeeper Jill Loyden  is also a familiar face to W-League supporters with the custodian one the few internationals to make an award winning impact in the W-League.  Loyden's 2009 season with the now defunct Central Coast Mariners helped them to the semi finals and earned her the Goalkeeper of the Year award.

Overview and Notable Players:  The inaugural season of the NWSL was not a fun for the Washington Spirit with the team struggling from the first whistle.

The Spirit did have strong players including USWNT goalkeeper Ashlyn Harris, US defender Ali Krieger, former US midfielder Lori Lindsey, Canadian defenders Robyn Gayle and Candice Chapman and Canadian midfielder Diana Matheson but they just couldn’t make it work on the pitch.

While things improved towards the end of the season, new coach Mark Parsons will be hoping his off-season signings can make an impact immediately. 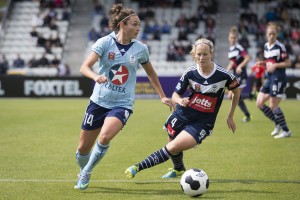 The big task for Parsons to make them all fit into a cohesive system.  It’s an understatement that the Spirit will need to get points on the board early in the season, if for no other reason than for squad confidence.

Australian/W-League notes:  The Spirit are led by midfielder Lori Lindsey who was a standout for Canberra United in the recent W-League season.

Overview and Notable Players:  Starting the season relatively slowly, the WNY Flash slowly built momentum that saw them sneak up to take out the 2013 regular season title.Consistency was the name of the Flash’s game and they were the only side not to have back-to-back losses thanks to a strong defence. 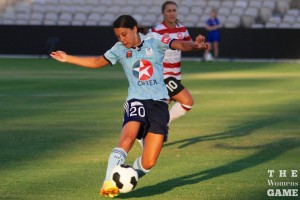 With injuries, pregnancy, trades and retirements effectively dismantling that backline, how Lines fashions one of equal strength will go a long way to WNY’s success this season.

Canberra United and Matildas goalkeeper Lydia Williams answered the SOS after standout custodian Adrianna Franch went down with a knee injury, while Kate Williamson joined on a trade and will be a big piece of the defensive puzzle.

Attack may just be the best form of defence with the defending premiers.

Australian/W-League notes:  Sydney FC teammates Sam Kerr and Emma Kete will long to continue their strong partnership with the Flash.  Kete and Kerr were big parts of the Sky Blues side that netted a W-League record 37 goals in the 2013/14 season.

While Angela Salem spent the 2012/13 with the Newcastle Jets before returning as a holding midfielder to become one of the most underrated but influential players for the Flash last season.

When your No. 1 goes down early in the season it is rare that a goalkeeper of Lydia Williams’ caliber is available as a replacement.  One of the top 5 goalkeepers in the world, the Canberra United custodian and 2x W-League Goalkeeper of the Year could play a large part in the Flash’s season.