The pained expression on Alicia Quirk’s face as she hobbled into the medal presentation group shot said it all about the Australian experience of Rugby World Cup Sevens in 2018.

Quirk suffered a knee injury in the semi-final loss, but she was still there, medal around her neck part of a side that has had a good year overall.

They were slow out of the blocks, something you can ill afford in knockout rugby but finished both days of the tournament very well. Along with Quirk, Sharni Williams and Ellia Green had impressive returns from injuries in good news for the team.

Emma Tonegato, looking relieved to have finished on a high conceded it wasn’t quite the tournament they’d hoped for.

“It’s a little bit different only playing four games. We knew we had to be on point each game and unfortunately, we weren’t in the semi- but it’s great to finish on a win.”

Initially unsure how a rugby field was going to fit into a ballpark, Emilee Cherry was happy with the pitch – particularly when Charlotte Caslick put in a kick for Green to score in the second half.

“It was absolutely awesome. The grass out there is really quick, and there was really dry weather, which really suited us. We thought it might be a bit windy, but conditions out there were perfect.”

Not the exact medal the @Aussie7s girls were after but a stylish way to round out their #RWC7s campaign. pic.twitter.com/59HwAVUkWc

Demi Hayes paid tribute to the quality veteran players in the Australian side, particularly Cherry.

“We’re in very different positions, but before every game I’m asking her questions, wondering what she’s thinking of the game plan. It’s awesome to be playing beside her.”

Cherry was effusive in praise for Hayes, saying she is inspiring to the squad and part of a good competitive team.

“We have seen her start from the very bottom playing club rugby and to come through the ranks and now represent Australia – there’s some very special talents coming through and it makes us push that little bit harder because we see how hard they’re working.”

Some of those talents will be on show in the Uni 7s domestic tournament in coming months.

Cherry is torn about recruiting other sevens stars in San Francisco this weekend for the Uni 7s competition, as it’s an important national pathway.

“It’s a real conflict of interest for us because we obviously want to grow the game in Australia and that’s what the Uni 7s is for; to give those girls who are on the cusp or haven’t really seen rugby sevens, come from other sports and give it a go. [But] those 1 or 2 internationals last year in the teams were awesome because they did lift the competition standard.”

Tonegato is looking forward to a short break before readying herself for the next World Sevens Series.

“A little bit of a holiday would be nice; then we’ll start to refresh for the new season. It’s been a massive season for us and obviously it starts sooner with [the] Colorado being added.” 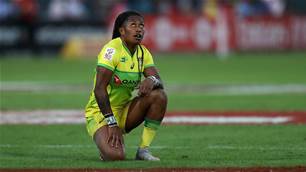