Australia's top gymnast are ready to take on the world stage in two weeks time at the World Artistic Gymnastics Championships in Doha.

The World Championships are the pinnacle event of the season with the likes of 2017 World all-around champion Morgan Hurd and four-time Olympic champion Simone Biles competing.

For Australia, the event will be used to help work on a number of different areas but Brown says the side just want to do their best.

"We just want to go out there and do the best that we can," she said.

"Work on our quality, consistency and come together as a team and do the best we can," Brown said.

Having won a bronze in the team final at the Commonwealth Games in April plus a silver in the balance beam, the 23-year-old is taking each event in the lead up to Tokyo 2020 one step at a time.

"This is the first step on the road to Tokyo, it's the first qualifying event so we are all going out there aiming to do the best we can and do what we've been doing in training and hopefully the result show through," Brown said.

"At the moment I'm taking it one competition at a time so at the moment all I'm thinking about is Worlds and doing the best we can, not even the outcome, just taking it day by day," she said.

Last year, only Georgia Goodwin made the All-Around Final of the World Championships where she finished 20th.

The World Championship is also the first step in Tokyo 2020 Olympic selection, but with Gymnastics Australia re-building the team, they are being realistic about their chances.

"Although it's only two years out from Tokyo, we are being realistic. Our first goal is to ensure we qualify our teams for next years World Championship as the next step in the process for Olympic selection," said Gymnastics Australia Director of Performance Strategy and Engagement Andrew Logan. 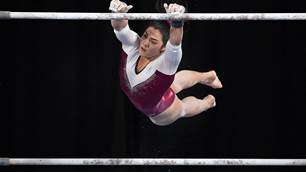