The Westfield Matildas have commenced their two-match series against Brazil on Sunday with 1-0 loss in heavy rain at Queensland Sport and Athletics Centre in Brisbane.

The Westfield Matildas have commenced their two-match series against Brazil on Sunday with 1-0 loss in heavy rain at Queensland Sport and Athletics Centre in Brisbane.

The Matildas toiled hard in the demanding conditions but ultimately failed to find their reward against the world’s sixth-ranked nation despite controlling large portions of the contest.

The visitors earned the win in the 68th minute when Debora Oliveira was played into the area and slotted a low finish past Matildas’ goalkeeper Brianna Davey.

The match started brightly for the hosts, with striker Michelle Heyman fashioning a shot in the opening minute, while the midfield hassled the Brazilians and denied them their samba swagger.

Emily Van Egmond was a stand-out throughout the first half, and combined well with Lisa De Vanna on several occasions throughout the opening twenty minutes without creating a clear goal scoring opportunity. 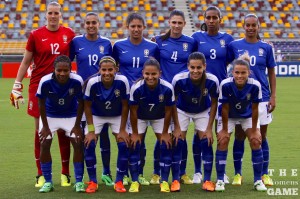 Australia held their own against an almost full strength Brazil

The visitors produced their first genuine chance on 23 minutes when Oliviera’s shot was deflected wide from distance. Only minutes later Benites headed high over the bar from close range from a corner kick.

The rain hit hard near the half hour mark and coincided with De Vanna and Van Egmond switching wings in the hope of opening up the Brazilians further.

Heyman used the wet conditions to her advantage to slip through an angled ball for De Vanna, but Brazil goalkeeper Thais Pacarte proved alert and quelled the danger with a sliding clearance.

At the other end, Davey produced a pair of telling interventions in the final minutes of the half as the teams entered the break with the scores still dead-locked.

Kate Gill replaced De Vanna at half time as Matildas coach Hesterine De Reus searched for greater height in the front third. However it was defender Clare Polkinghorne who produced the first shot on target in the second half, heading at the back post from a set piece to force a sharp save from Picarte.

The Matildas continued to find their best chances down the right hand side of the field, with Teigan Allen whipping in a smart cross on the hour that evaded the waiting Heyman and Van Egmond.

Brazil appeared increasingly frustrated and earned a double booking for Miraildes Mota and Cristiane Rozeira, before Oliveira made the breakthrough barely a minute later.

The over 2,500 strong home crowd tried to rally the troops, and Gill almost obliged with 20 minutes remaining when she fired a rocketed shot in to the side netting after being teed up following Tameka Butt’s cross-field run.

Heyman outmuscled her defender following an early ball over the top of the backline, only to see Picarte again quickly intercept the danger but come off second best in the challenge.

Further chances fell the hosts way in the final exchanges but it proved not to be for the Matildas in the end.

Gill saw her shot smothered by Picarte following a goalmouth scramble brought about by Kellond-Kngihts’ neat cross before Heyman spurned arguably the best chance of the match, pushing her shot wide with only the keeper to beat in injury time.

The teams will meet again behind closed doors this Wednesday at the same venue as the Matildas continue their preparations for the 2014 Asian Women's Cup in Vietnam late next month.