It was a fairly poor start for Australians at the US Open, with Ash Barty the only Aussie female through to the second round out of a possible four so far.

Barty shockingly lost the first set against 77 ranked Kazakh Zarina Diyas 1-6, before battling back to win the next two 6-3, 6-2.

Barty has time to hit her groove though, she doesn't face anyone in the top 30 until the Round of 16.

“I just had to start with my serve,” she said.

“I really wasn’t giving myself enough chances on serve. I don’t know what the percentage was in the first set … but it wasn’t good.

“(Had to) go back to the basics, start again and try to figure it out.”

Wildcard Sam Stosur, qualifier Priscilla Hon and Daria Gavrilova weren't so lucky, with none of the three contenders picking up a set in their respective losses.

Former top-ranked Aussie Gavrilova is now without a win across the current Grand Slam season and has been talking about a potential break from tennis.

While she hasn't openly discussed plans to retire, this is rumoured to be possibly Stosur's final US Open tournament. She won the tournament, her only singles Grand Slam title, in 2011. 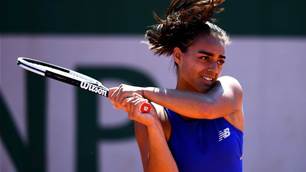 Barty, Stosur, Poulos the last Aussie hopes at US open