Australia has secured valuable points ahead of the last leg of the World Rugby Sevens Series after finishing second in Canada.

The Aussies came away with a silver medal after a 17-21 loss to New Zealand in the Cup Final on Monday morning AEST.

The performance saw them hold onto fourth spot on the World Series ladder on 74 points while extending their lead over France and chasing down Canada (78 points) and USA (80 points).

“I was really impressed with how we adapted in differing situations when we were tested, and the team found ways to get over the line when required."

After beating Russia and France, Australia came up against long-time rivals New Zealand in the Cup Final. It was the second time Australia had made a Cup Final this season while it was New Zealand's fourth.

However, whenever these two nations clash it is always a great spectacle.

In the opening exchanges, New Zealand had all the possession but a clutch rush up tackle from Ellia Green forced the mistake and allowed the Aussies to regather the ball which would result in a try.

But the Kiwis struck back through captain Sarah Hirini and converted to take the lead and they went over again just before the break. The Aussies continued to fight and a strong run from Charlotte Caslick broke New Zealand’s line to put Emma Tonegato over.

The Black Ferns were the first to strike in the second half with Tyla Nathan-Wong but as they hammered Australia inside their own half they booted the ball downfield allowing Green to chase.

Star of the show @tylanathanwong scores a fantastic try, putting her team on track for the trophy in Langford#DHLRugby #Canada7s pic.twitter.com/pJcpNJ5MH9

Green went on to pounce on the loose ball and lower the gap to 17-21 but from the restart New Zealand earned a scrum, allowing them to put the ball out and win the Canada Sevens.

“We showed in Canada that this team is really heading in the right direction and we have claimed some valuable Series points.”

The final round of the Series will take place in Biarritz in the South of France next month. 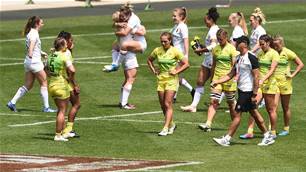 Do or die for Australia at Canada 7s