The game settled after the goal and both teams had opportunities to score. Alanna Kennedy was close to getting on the end of a ball served into the box by her Pride teammate, Marta, but the service was just out of reach of Kennedy’s diving header.

🅰️ for effort (and @AlannaKennedy).

The Pride could not find an equaliser resulting in their fourth loss of the season. In the five games, they’ve played the Pride have a league low of just one goal.

Kennedy and Emily van Egmond both got the start for the Pride. Kennedy played a full 90 and van Egmond was subbed off in the 68th minute of play. Clare Polkinghorne notched 90 minutes for the Dash and Kyah Simon was unavailable for the game with a right ankle injury.

Ellie Carpenter, Caitlin Foord, and Hayley Raso with the Portland Thorns had a bye week in the NWSL and will travel to Orlando next week to take on the Pride.

Tameka Yallop and Klepp took on Sandviken. Both teams are in the upper third of the league. Sadnviken was able to score two goals in the first 50 minutes of play.

Klepp was able to avoid the shutout by scoring in the 87th minute but could not find the equalizer and lost the game 2-1.

Atletico Madrid played Real Sociedad and a win for Atletico would secure the league title.  Atletico put on another dominating performance netting three goals and only giving up one goal.  They were able to win the Primera Division with 84 points.

Alex Chidiac was not available for the game.

Levante looked to finish the season strong and stay at the top of the league standings when they took on Sevilla FC. However, Levante got off to a slow start and went down 1-0 five minutes into the game and would not be able to get a goal of their own. The team finished in third place with 57 points.

In the opening round of the season, Grace Maher's KR played full minutes in her side's 1-0 loss to HK/Víkingur. 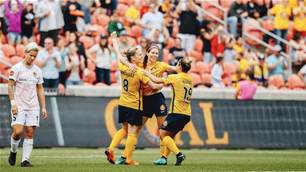